US President Donald Trump has called on NASCAR's only black driver Bubba Wallace to apologize for protests launched over a noose found hanging in his garage stall, which the FBI found not to have been evidence of a hate crime.

The garage door pull-rope fashioned like a noose - widely seen as a symbol of lynchings in the American South - sparked outrage when it was discovered during a period of nationwide protests over police brutality and racism.

Dozens of Wallace's fellow drivers staged a demonstration against bigotry but an FBI probe quickly found that the rope had been hanging in the stall months before the 23 June race at the Talladega Superspeedway in Alabama.

"Has @BubbaWallace apologized to all of those great NASCAR drivers & officials who came to his aid, stood by his side, & were willing to sacrifice everything for him, only to find out that the whole thing was just another HOAX?" Trump said on Twitter.

The noose discovery was made shortly after Wallace had successfully campaigned for a ban on flying the controversial Confederate flag at NASCAR, a popular sport with conservative Americans. 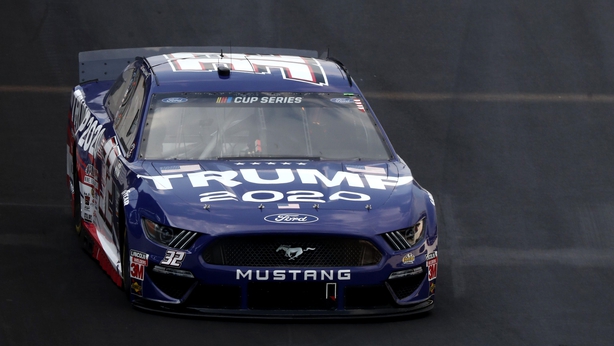 A car driven by Go Fas Racing team's Corey La Joie was emblazoned with 'Trump 2020' for the Brickyard 400 event last Sunday but crashed out just 16 laps into the race.

Trump added in his tweet that the ban and the noose controversy had "caused lowest ratings EVER!" however broadcasters Fox Sports and NBC have both reported increased viewership since NASCAR resumed in May.

The president's remarks came after two divisive Independence Day weekend speeches which critics said were an attempt to exploit racial animus and stoke fear among his base of white supporters, four months ahead of the presidential election.

Last week Trump, who is trailing presumptive Democratic challenger Joe Biden in the polls, shared a video of his supporters chanting "white power" before deleting it amid an outcry.

This is the "garage pull." If you were a Black American, the first thing that goes through your mind wouldn't be "this is a garage pull." pic.twitter.com/dfJqIR3UIY

NASCAR president Steve Phelps noted after the inquiry had finished that "the noose was real" and "our initial reaction was to protect our driver."

"In hindsight, I should have used the word 'alleged' in our statement," said Phelps.

The US has been upended by protests against racism and police brutality since the killing of African American George Floyd by Minnesota police in May.

The demonstrations have seen attacks on relics of the country's slave-holding history such as the Confederate flag and statues of Confederate generals.

Trump has branded the movement a "left-wing cultural revolution" and vowed to resist it.