Nico Rosberg believes Sebastian Vettel fully deserved to be stripped of his victory in Canada, accusing the Ferrari driver of always thinking he is right and blaming others for his mistakes.

Lewis Hamilton's victory in Montreal on Sunday was controversial as Vettel was demoted to runner-up following a five-second penalty for running off at the Turn Three, before re-joining the track in a dangerous fashion.

Ferrari have until Thursday to decide whether they will formally appeal Vettel's punishment.

Rosberg, who beat Hamilton to the championship in 2016 before retiring days later, says the Ferrari driver only has himself to blame.

"Vettel went all the way across the track, and he could easily have left more space for Lewis. He left hardly any room," said Rosberg.

"Lewis cannot be blamed for anything. He had to back out of it. He would have been in the wall if he had stayed there. It is very clear it was an unsafe return to the track.

"It is not a valid excuse for Vettel to say 'I was out of control, I had dirty tyres and I couldn't see Lewis'. It was a fully deserved penalty."

The red mist descended over Vettel as he took aim at the stewards on the radio after the race before, failed to park his car in the area reserved for the top three, and  initially refused to take part in the podium celebrations at the Circuit Gilles Villeneuve.

He then marched in front of Hamilton's parked-up Mercedes and removed the board declaring he had finished first, replacing it with the second-place marker reserved for his Ferrari. 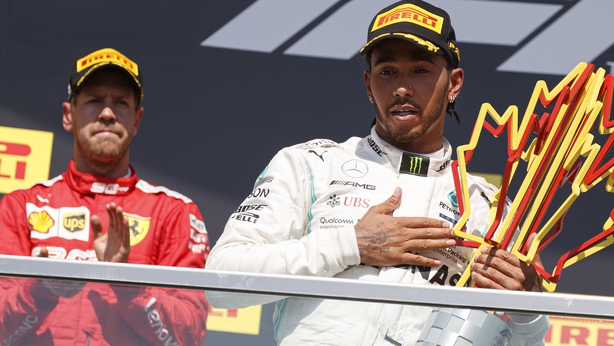 "This is Sebastian's weakness," added Rosberg. "He keeps complaining and complaining on the radio about a decision he cannot influence instead of focusing on the damn driving, and trying to establish a five-second lead. Just focus, nail those laps, and you still have a chance to win.

"But he has such strong self-belief, he always thinks he is in the right, and always wants to blame other people, that he loses focus in those moments.

"After the race, all the gestures and disrespectful comments where Vettel called the stewards 'blind men' was unnecessary, too.

"He messed up. He should see that he is the one that made the mistake, and he is the guy to blame."

Vettel, who will now contend the French Grand Prix on 23 June on a 301-day winless run, ultimately made a mistake that was his third in as many direct duels with Hamilton after he spun in Monza last season and Bahrain this year.

The German has also made a series of other errors which have derailed his title challenge in the past two and a half seasons.

Rosberg concluded: "We saw again that when the pressure is on in a battle between Lewis and Vettel, that Vettel just makes those mistakes.

"You can see how much pressure is on him. It is huge because everything has been going wrong and when the opportunity comes for a win, it goes wrong again."

Hamilton, who is now 62 points ahead of Vettel in the standings, described his rival's move as "dangerous" on the radio.

"It's a natural instinct that we have as drivers. You're not going to go, 'Actually I'm going to pull to the left and let them bloody go by.'

"But he did block me, and the way the rules are written, that's how it's prescribed."