Niki Lauda will be remembered for arguably the most remarkable and courageous comeback in sport.

At the 1976 German Grand Prix, Lauda was trapped in a fireball inferno. He had swerved off track at the Nurburgring, hit the wall, his car caught on fire.

But just 40 days after he almost burnt to death at the wheel of his Ferrari, sustaining injuries so catastrophic he was read the last rites in hospital, Lauda returned to his Formula One cockpit.

"I got so upset because of this incident with the priest, that I put more effort into not dying," said Lauda, decades later.

Yet after contracting pneumonia while on holiday in Ibiza earlier this year, only months after a lung transplant, Lauda would not be able to deliver another miraculous fightback.

The three-time world champion and non-executive chairman of the Mercedes Formula One team died on Monday, aged 70.

Andreas Nikolaus Lauda was born on February 22 1949 to his father, Ernst-Peter, and mother, Elisabeth, and into a wealthy industrial family. 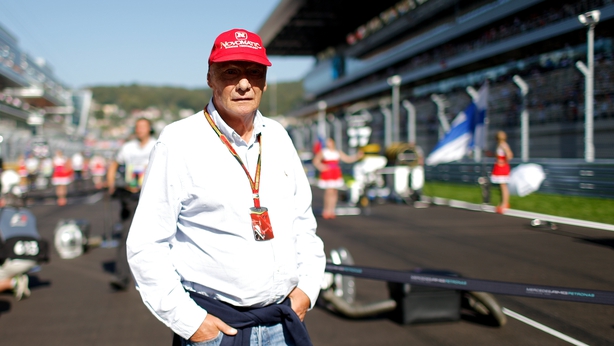 Lauda was expected to follow in his father's business footsteps, but, against his family's wishes, he pursued a career in motor racing.

Lauda's thirst for speed was unquenchable, but his grandfather Hans, a member of the supervisory board at an Austrian bank, vetoed a £125,000 loan to allow him to race for the Max Mosley-owned March Formula One team.

"I telephoned my grandfather and asked him if he could please f*** off interfering in my business," said Lauda.

"But he said he wouldn't and that no Lauda would ever be a racing car driver. I never spoke another word to him for the remainder of his life."

Lauda then took an almighty gamble, securing a loan against his own life insurance to buy a ticket into F1. It proved inspired.

In 1971, he made his grand prix debut at his home race in Austria. Another bank loan followed, and two years later he scored his first points, finishing fifth for BRM in Belgium. Then came the breakthrough: a move to the mighty Ferrari.

Lauda scored the first victories of his career in 1974, and a season later won five times to secure his first world championship.

But 1976 would prove the defining year of his life. Indeed, such was the theatre of the most talked-about season in F1 history, that Hollywood released Rush - a film which depicted the rivalry between Lauda and Hunt - the slim, calculated Austrian, nicknamed the 'Rat', versus the playboy Englishman.

Heading into the 10th round in Germany, Lauda looked set to defend his title, having amassed a 31-point lead.

But Lauda held grave concerns about the safety of the Nurburgring - a 14-mile circuit so feared it was nicknamed the Green Hell - and he wanted to boycott the race. He was voted down by his fellow drivers, and on lap two, Lauda's Ferrari was in flames.

Lauda lost control of his car at the embankment, crashed into a wall, and as he slid back across the track, his Ferrari caught on fire. Four passing drivers stopped to drag him out of the burning wreckage.

"The main damage to myself, was from inhaling all the flames and fumes while I was sitting in the car for about 50 seconds," said Lauda, many years later. "It was something like 800 degrees."

Lauda had breathed in toxic gases, suffered third-degree burns, and fell into a coma.

He lost most of his right ear, his eyebrows and his eyelids, and would carry the scars from the accident for the remainder of his life - Lauda's red cap to hide his partial disfigurement would be seen in Formula One paddocks around the world for the next 40 years.

Yet miraculously, he missed just two races, returning for the Italian Grand Prix six weeks later. He finished fourth, ending the race with his balaclava stuck to his face such was the extent of his unhealed facial wounds. It was a remarkable moment of sporting bravery.

The title went to the wire at a rain-hit Fuji. Lauda, who led Hunt by three points, retired from the race blaming the awful conditions. Hunt raced on, and despite dropping down the field after a dramatic late tyre problem, crossed the line in third to take the title. The contest between Lauda and Hunt ignited the popularity of Formula One around the globe.

'77 was his final season with the Ferrari team, departing for Brabham with whom he spent two seasons before announcing his retirement from the sport.

However, he returned to race for McLaren for four seasons between 1982 and 1985, scooping a third world title in 1984 after beating team-mate Alain Prost by just half a point. He would hang up his helmet with a hat-trick of titles, 25 victories and 54 podiums from 171 starts.

All at McLaren are deeply saddened to learn that our friend, colleague and 1984 Formula 1 World Champion, Niki Lauda, has passed away. Niki will forever be in our hearts and enshrined in our history. #RIPNiki pic.twitter.com/Ndd9ZEfm6B

A consultancy role at Ferrari would follow in the 90s before he became non-executive chairman at Mercedes in 2012 - his first act persuading Lewis Hamilton to join the team the following year, ensuring Lauda's stamp on Formula One for five decades.

Lauda is survived by his second wife Birgit, and his children, Max, Mia, Mathias, Lukas and Christoph.