Lewis Hamilton ended his remarkable season in winning fashion by charging to victory in Abu Dhabi, as Nico Hulkenberg escaped injury when he was trapped after his Renault caught fire.

Hamilton's win under the lights of the Yas Marina circuit, aided by a Mercedes tactical masterstroke after they called the British driver in for an early change of tyres, was the 11th of his championship-winning year, with Ferrari's Sebastian Vettel second and Red Bull driver Max Verstappen completing the podium.

But the concluding race of the 21-round season will be remembered for Hulkenberg's opening-lap crash.

The 31-year-old German somersaulted through the air one-and-a-half times before landing the wrong way up after he collided with the Haas of Romain Grosjean through the right-handed Turn 9.

Hulkenberg was left dangling upside down, and unable to slide out of his Renault following the introduction of the halo, Formula One's three-pronged safety device that sits above the cockpit.

"I'm hanging here like a cow," Hulkenberg said over the radio. 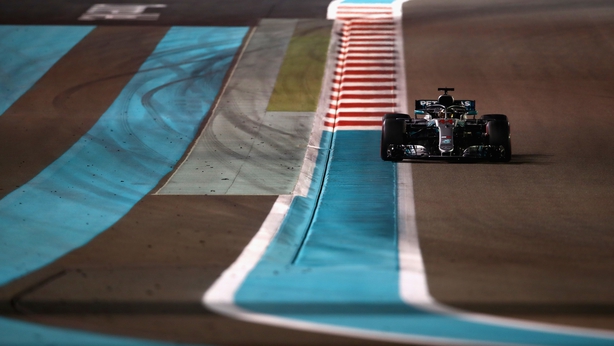 The safety marshals were quickly on the scene before the flames went out, but the German was in his car for more than three minutes during the harrowing incident.

He was assisted to the medical centre, where the sport's governing body, the FIA, reported he was shaken. Hulkenberg was later released, with doctors confident he had escaped the collision unharmed.

The early incident saw the safety car sent out for six laps with pole-sitter Hamilton leading the pack.
Hollywood superstar Will Smith had jokingly taken Hamilton hostage before the race, tieing the world champion up, and heading to the Briton's car in personalised Mercedes overalls.

But when Hamilton took to the machinery which propelled him to his fifth world championship with two rounds to spare, he made no mistake with a dominant display befitting of his dominant year.

His Mercedes team played their part, too, after they took advantage of a Virtual Safety Car - deployed when Kimi Raikkonen stopped on the main straight with an engine failure in his final race for Ferrari - to allow Hamilton the chance to effectively make a free pit stop.

He returned to the track in fifth, temporarily racing with Verstappen, but when those ahead came in for tyres, Daniel Ricciardo the last of those pitting on lap 33, Hamilton re-took the lead, crossing the line 2.5 seconds clear of Vettel. 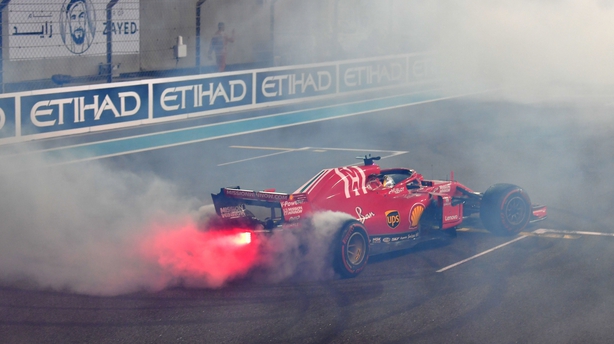 Ricciardo, in his final race for Red Bull, took the chequered flag in fourth ahead of Valtteri Bottas.
Fernando Alonso, competing in his 312th Formula One race, finished outside the top 10.

He was unable to do so, ending his world-championship winning career in 11th.

"It has been a real honour and privilege racing against Sebastian," Hamilton, 33, said after performing a series of doughnuts on the main straight.

"He has always been a hard-working racing driver. He did a fantastic job this year. There is so much pressure, so don't ever just look at our shortcomings. I know he is going to come back strong.

"Fernando is a true legend. Before he got to Formula One, I was admiring what he achieved. I don't feel like I miss another driver but the sport will miss him."

Vettel said: "Lewis is the champion and he deserves it. It has been a tough year. I tried everything until the last lap today. I enjoyed catching him a little bit, but he controlled the race.

"It has been a long year. We will try, and our whole team will try, to come back stronger to give him a harder run next year."