MotoGP world champion Marc Marquez moved a step closer to retaining the title after winning the Aragon Grand Prix for Honda on Sunday to extend his lead at the top of the standings to 72 points.

Marquez, who started third on the grid, outfought Italian Andrea Dovizioso after pole-sitter Jorge Lorenzo crashed out on the opening turn to claim his first victory in five MotoGP races.

Marquez changed to a soft rear tyre just before the start of the race and took control in the last three laps, fending off the Ducati rider Dovizioso to win his home Grand Prix.

"Today, I took a risk, a gamble," Marquez said. "I put the soft rear tyre because during the weekend every time I put the hard I felt okay, but I didn't feel good.

"Sometimes I put the hard to be safe, but today I said, 'okay, I'll take a risk'. I was riding really good, really smooth in the beginning.

"I was able to follow Andrea in a good way, and we were fighting in the end, a great fight. Really top movement at the limit, I was one time in the green, was completely at the limit, but I enjoyed a lot." 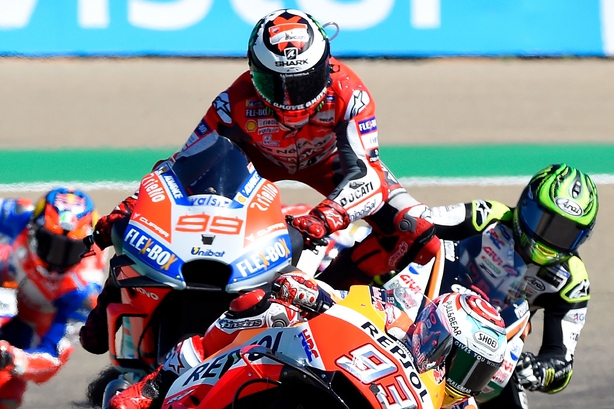 Suzuki's Andrea Iannone briefly threatened to make it a three-way fight for first place but settled for third ahead of Alex Rins.

Lorenzo crashed for the second race in a row after drifting wide in the first corner, and was left with a dislocated toe.

Dovizioso, who started second on the grid, had a slender lead over Marquez after Lorenzo's crash, with a bunch of riders close behind, but the two leaders began to pull away after the halfway mark.

Marquez took the lead on the 14th lap, but Dovizioso regained the upper hand two laps later before Marquez made the decisive move with three laps remaining.

"Marc is very strong here," Dovizioso said. "The real surprise is we're fighting with Marc, so I'm so happy about the work we did during this season, to come here in this moment of this championship very strong.

"We were fighting for victory on a bad track for us. This is good for this championship and also for the future."