Sebastian Vettel has hit back at Lewis Hamilton's "silly" accusation that he won the British Grand Prix following underhand tactics by Ferrari.

Hamilton fought his way back from last place to finish second after Vettel's team-mate Kimi Raikkonen collided with his Mercedes on the opening lap.

Hamilton afforded Raikkonen space at the right-handed third turn during the frenetic Silverstone race, but the Finn locked up, before his left-front tyre thudded into the right-rear of Hamilton's Mercedes.

The Englishman was sent into a spin, and he re-joined the track at the back of the pack.

The stewards had no trouble in declaring Raikkonen as the guilty party. He was slapped with a 10-second penalty and two points on his drivers' licence.

After Vettel's collision with Hamilton's team-mate Valtteri Bottas in France, Sunday's coming together marked the second time in just three races that a Ferrari car has hit a Mercedes.

"Interesting tactics from their side," Hamilton, who dropped eight championship points behind Vettel, said on the podium. 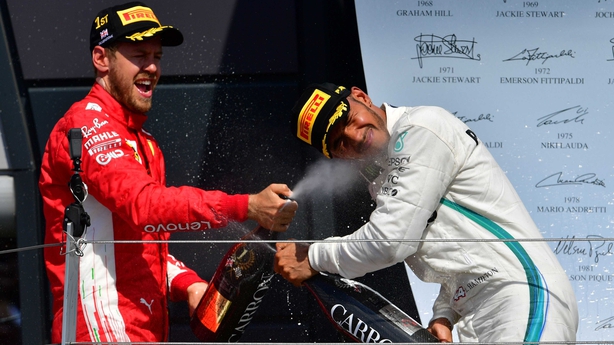 Later, when asked if he felt the move by Raikkonen was deliberate, the Brit replied: "All I would say is that in two races the Ferraris have taken out one of the Mercedes.

"A five-second penalty (for Vettel in France) and 10-second penalty here spoils our race. It is a lot of points that Valtteri and I have lost in those two scenarios."

He added: "In the future, we have got to position ourselves better so we are not exposed to the red cars because who knows when that is going to happen again."

Responding to Hamilton's remarks, Vettel said: "It's quite silly to think anything that happened was deliberate.

"I would struggle to be that precise to take somebody out. In France, I lost my wing so I screwed my race.
"There wasn't any intention and I find it a bit unnecessary to even go there."

Despite his breathless comeback, Hamilton was visibly furious with Raikkonen's behaviour. The Englishman broke protocol by refusing to be interviewed after the race and headed straight for the podium green room.

Explaining his decision, Hamilton added: "I sweat my a**e off in that race. I pushed 1000 per cent with every bit of energy I had. I didn't have anything left when I came in.

"People expect you to get out of the car and wave and smile. I gave everything I could, and I was struggling to stand.

"It's so physical nowadays. It's different when you're in the lead and can control the pace, but I was coming from last. So, I didn't have much to give at that time and needed to take a deep breath."