Lewis Hamilton edged ever closer to winning a fourth world championship after a crushing victory over Sebastian Vettel at the United States Grand Prix.

Hamilton lost out to his fast-starting rival on the uphill dash to the first corner, but reclaimed the lead just six laps later.

The Briton survived a nervy opening pit stop, in which he rejoined the track just in front of Vettel, but this win - his ninth of an impressive season and fifth in the six grands prix since the summer break - rarely looked in doubt.

Hamilton now needs to finish only fifth in Mexico, the second race of this back-to-back instalment next Sunday, to clinch his fourth crown.

Hamilton crossed the line 10.1 seconds ahead of Vettel with Max Verstappen, who started way down in 16th, producing another starling performance with a sensational last-lap move on Kimi Raikkonen.

The Dutchman however, was stripped of his third place after he was handed a five-second time penalty for leaving the track when he made his move on Raikkonen to demote him back to fourth.

Valtteri Bottas finished only fifth on a disappointing day for the Finn, but Northamptonshire-based Mercedes did enough to secure their fourth consecutive championship with three rounds still to go.

Boxing announcer Michael Buffer set the scene at a sun-blazed Circuit of the Americas by introducing each of the 20 drivers to the grid in a pre-race show full of razzmatazz in Liberty Media's first race as Formula One's owners on home soil. 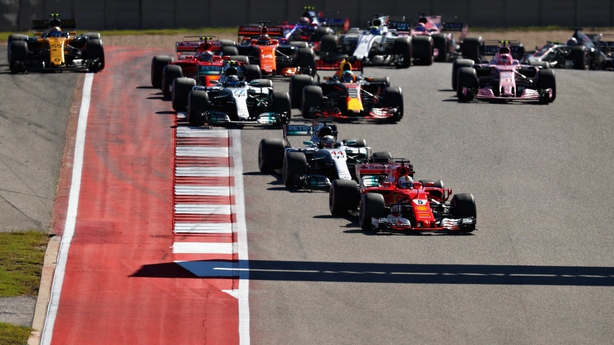 Eight-time Olympic champion Usain Bolt was in attendance, as was former US president Bill Clinton.

Hamilton, who headed into the race well aware that he would be crowned champion if he won and Vettel finished outside the top five, was the last driver to be presented on to the grid before he made his way to the centre of the track to face off against his rival.

The Briton may have hoped that would be the closest the Ferrari driver would get to him over the course of the scheduled 56 laps, but Vettel was the fastest out of the blocks.

Pole-sitter Hamilton attempted to block off Vettel's charge, but the German was too quick. Hamilton left his rival enough space, and while they were within millimetres of touching wheels, it was Vettel who would emerge from the first corner in the lead.

There was no sense of panic from Hamilton however, who kept tabs on Vettel before slowly drawing him back in. By the start of the sixth lap, Vettel was just half-a-second ahead and on the approach to Turn 12, Hamilton made his move.

While Vettel could be accused of being slow to react, it was a brilliantly executed overtake by Hamilton as he lunged underneath the four-time champion.

Although Hamilton and Vettel have been contesting the title all year, it was only the second time they had passed one another on track this year. Hamilton did so on Vettel to win in Spain, and again to take the chequered flag here. 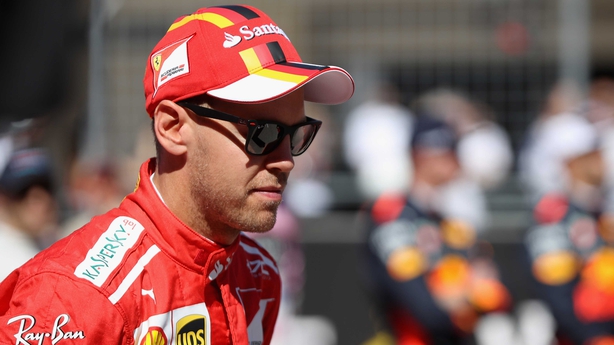 Hamilton was not in the mood to hang around, and within three laps of making his move, he had opened up a two-second gap, and by the time Vettel stopped for his first change of tyres, Hamilton was 4.4 sec up the road.

Hamilton then pitted three laps later, but Vettel - on fresh rubber - had been on a charge, and when Hamilton rejoined the track his lead had all but evaporated.

"That was a little bit close, guys," Hamilton said over the team radio. "Why did we allow him to get so close?"

It was however, the only moment of drama for the Briton on yet another masterful afternoon in Texas.

In contrast, Vettel had to work hard for his runner-up spot after he stopped for a second time on lap 39. He was the only driver of the front-runners to attempt a two-stop strategy but he hunted down Bottas before making his move with a bold swoop around the outside of the Mercedes with five laps remaining. Raikkonen then moved aside for his team-mate on the following lap.

Verstappen appeared to have completed a remarkable drive by finishing on the podium - only to be denied by the stewards after they penalised him for the move.