Hamilton, who is 20 points behind Sebastian Vettel in the race for this year's championship, finished more than half-a-second clear of his nearest challenger as he bids to win his home race for a record-equalling fifth time.

But the Briton is facing a stewards' investigation after he was alleged to have blocked the Haas of Romain Grosjean.

Hamilton's preparations for the 10th round of the championship have been dampened by criticism he courted for failing to attend a promotional event in London earlier this week.

But the 32-year-old Englishman delivered the perfect retort with the fastest lap ever seen here since the circuit was modified back in 2011.

He finished well clear of Raikkonen and three-quarters of a second faster than his chief championship protagonist Vettel. Hamilton's Mercedes team-mate Valtteri Bottas qualified fourth, but will start ninth after serving a five-place grid drop for a gearbox change.

"This is definitely the best position to start from," Hamilton, 32, said. "I need to make sure I do it for these guys," he added pointing to the crowd on the pit straight.

Vettel was on his best behaviour at the last race in Austria, well aware that any petulance would see him slapped with three points on his licence, and a subsequent ban from this week's race. 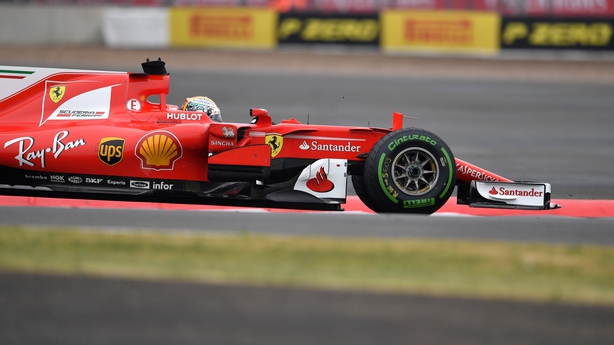 But there was a glimpse of the old, fiery German here after he complained he had been blocked by the Force India of Sergio Perez. "What the hell is Perez doing?" Vettel shouted. "He needs to watch his mirrors. Austria was the same thing." Vettel also expressed his anger over the team radio after qualifying only third.

Fernando Alonso topped the order in Q1 - the opening phase of qualifying - after bolting on a set of dry tyres and blitzing the 3.6-mile circuit as the track began to dry out after earlier rain.

His lap brought a huge cheer from fans of Alonso and his British team McLaren following what has been another lacklustre campaign. Indeed it was the first time a McLaren car had been quickest in any qualifying session since the 2013 Indian Grand Prix.

But the Spaniard's efforts were rendered effectively redundant after he headed into the one-hour session already facing a mammoth 30-place grid penalty following further changes to his Honda engine.

It means the 35-year-old, who was ultimately dumped out of qualifying at the second attempt after finishing 13th, will be thrown to the back of the grid.

His McLaren team-mate Stoffel Vandoorne did however progress to the top-10 shootout as he out-qualified Alonso for the first time this season. The Belgian, who replaced Jenson Button, qualified ninth.

Joining Alonso at the back will be Daniel Ricciardo after his Red Bull conked out with just 10 minutes gone.

The Australian, already due to serve a five-place grid drop after a gearbox change, pulled over at Woodcote and was forced to abandon his car.

"I thought five places was painful but now we are starting at the back of the grid," Ricciardo said. "It's disappointing not to be able to show more of what we can do in qualifying."