Eugene Laverty was taken away on a stretcher after a nasty tumble on his Ducati in practice for the Japanese Grand Prix at Motegi on Friday.

The Antrim crashed late in the second session, but his Aspar team later tweeted that he had walked into the medical centre.

"He is OK but he will get a double check at the Utsunomiya Hospital."

The 30-year-old is currently 11th in the overall standings. Last April he took fourth in the Argentina GP - his best ever result in the class.

Honda's Marc Marquez, who has an outside chance of clinching the MotoGP title this weekend, managed only the fourth quickest time in practice.

The Spaniard is taking a cautious approach to Sunday's race despite it offering the first of four likely opportunities to wrap up his third world title. 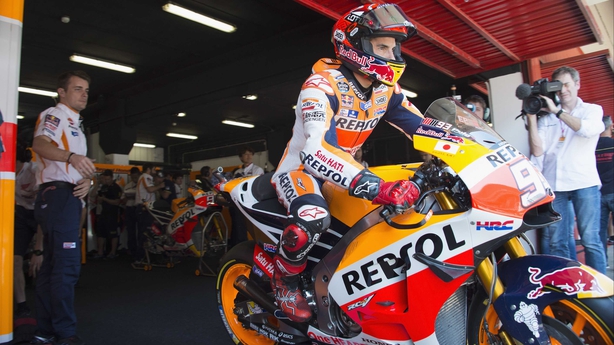 Marquez [above] embarks on the three-race, three-week Asia-Pacific swing through Japan, Australia and Malaysia with a 52-point advantage over Valentino Rossi and 66 points ahead of Jorge Lorenzo in the riders' standings.

With 25 points for a victory, the Spaniard needs to win Sunday's race with Italian Rossi finishing 15th or lower and reigning world champion Lorenzo no better than fourth.

Although Marquez comes into the race on the back of a victory in Aragon and has happy memories of the Motegi circuit after clinching his second title there two years ago, the 23-year-old has never won in MotoGP at the home of Honda.

"It's a circuit that has always been a bit challenging for us," Marquez said this week.

"That said, we'll approach it with an open mentality, aiming for the best result possible but ready to adapt to the circumstances."

Marquez was one of several riders who came off their bikes on Friday, sliding off his Honda at turn 10. He was able to rejoin the session.

The weekend of his team-mate and compatriot Dani Pedrosa was ended, however, when he high-sided and was sent flying 10 metres onto the trackside, fracturing his right collarbone.

The 31-year-old Spaniard, who currently sits fourth in the world standings after 14 rounds this season, sustained the injury when he was involved in a huge crash at the Twin Ring Motegi and has been told he requires surgery.

Repsol Honda test rider Hiroshi Aoyama of Japan will replace Pedrosa for Sunday's race in front of his home crowd.