Nico Rosberg is refusing to get carried away by thoughts of celebrating a maiden Formula One title triumph at the end of the season, despite getting one hand on the championship crown with victory in the Japanese Grand Prix.

The German eased to a maiden win from pole position at the Suzuka circuit on Sunday, chalking up his ninth win of the year, to lift himself 33 points clear of Mercedes team-mate Lewis Hamilton in the overall standings.

Such is Rosberg's margin that, with just four races to go, the 31-year-old can take the title without needing to win another race.

"Remember when Nico won eight races in a row and then Lewis had that winning streak? I think its going to go down to the end" - Toto Wolff

"I don't feel relief," said Rosberg, only the fifth driver to win nine races in a season. "I'm just happy to win the Suzuka race."

Rosberg's comments are in keeping with the approach the German has adopted this year, focussing on each race as it comes rather than the campaign as a whole.

Runner-up to Hamilton in the overall standings in the last two years, he is not planning to change it now that the title is within reach.

"The best reasoning is that it's actually working quite well," said Rosberg. "So why change something if it's going quite well?

"The approach that I have at the moment is just coming here, focussing on the weekend and trying to get that win."

Never has a driver who has won eight or more races in a season gone on to lose the title.

Rosberg also currently appears to have the psychological edge over Hamilton, who cut a distracted and withdrawn figure in Suzuka. 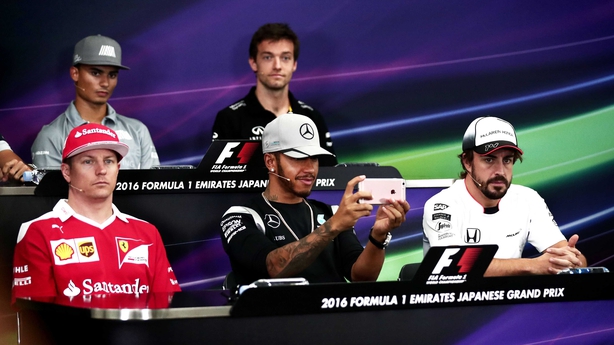 But Rosberg, who can equal Michael Schumacher and Sebastian Vettel's record of 13 wins in a season if he triumphs at the remaining races, knows how quickly fortunes can turn.

Hamilton has not won since the German Grand Prix at the end of July while Rosberg has won four of the five races since.

Nevertheless, the Briton had been on course to take back the overall lead until his engine blew in Malaysia.

Rosberg also knows that in Hamilton he faces a formidable competitor, who earlier this season converted a 43-point deficit to the German into a 19-point advantage with a streak of six wins from seven races.

"You can see how quick it goes in Malaysia, you're in the lead and if the other guy wins its 25 points lost and then the gap is down to eight," said Mercedes team boss Toto Wolff.

"Remember when Nico won eight races in a row and then Lewis had that winning streak?

"I think its going to go down to the end."