Nico Rosberg insists he is not struggling with a lack of self-belief despite seeing Lewis Hamilton turn his 43-point championship lead into a 19-point deficit by virtue of the Briton's fourth consecutive victory on Sunday.

Following his triumph at the German Grand Prix, Hamilton has now won six of the last seven races, while taking a clean sweep of all the four grands prix which were staged in July.

Indeed the defending champion has now firmly established himself as the favourite to win his fourth title as Formula One heads for its summer break.

Rosberg won the opening four rounds of this year's championship, but - since his dramatic crash with Hamilton on the opening lap of the Spanish Grand Prix in May - he has won on just one occasion with his Mercedes team-mate scoring 62 more points.

But a bullish Rosberg, who finished his home race only in fourth following an afternoon he will wish to forget in a hurry, dismissed the notion that it would now be difficult for him to retain the belief that he can beat Hamilton and win his maiden title.

"No, I have enough evidence to show myself that I'm strongest after difficult moments, time and time again, so no issues there," Rosberg said.

"Lewis doesn't just seem strong in the recent grands prix, Lewis is strong, so there is a big difference. It's always going to be a battle against him.

"I'm disappointed because I had an awesome qualifying and I was really optimistic I could bring it home, so I am just very disappointed that everything went wrong."

Just as in Hungary last Sunday, Hamilton roared off the line to emphatically beat Rosberg on the short run down to turn one, and from there his victory never looked in doubt.

"It is kind of crazy that it's gone by so quickly," a jubilant Hamilton, whose defence of his third title had been fraught by a number of mechanical issues, said as he reflected on his championship lead.

"It feels like only a couple weeks ago we were in Barcelona and I was 43 points behind thinking, 'jeez, I might come away 50 points behind'.

"I was finding it hard to find a way through the woods, through the trees, having to navigate through that, not giving up, to keep going and keep believing the light is beyond the bushes.

"My mechanics have all stayed super focused which has enabled me to do the same. They have shown no signs of giving up and that's inspired me, and this result shows to never give up. So, I really owe it to them.

This is the best way to go on holiday." 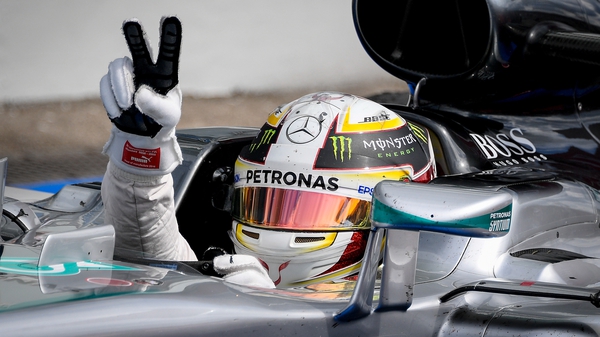