McLaren's Fernando Alonso has been given the green light to take part in the Chinese Grand Prix following his latest check-up in Shanghai.

Alonso, who missed the last race in Bahrain after sustaining fractured ribs in his huge shunt at the season-opening Australian Grand Prix, was requested to report to the FIA medical team after opening practice.

And following a brief examination, Formula One's governing body saw no reason to stop the Spaniard, who posted the 12th quickest time in Friday's opening practice, from competing in the remaining sessions at the third round of the championship.

"As a result of a medical examination undertaken following Free Practice One, the FIA F1 Medical Delegate, Prof. Jean-Charles Piette, and the Chief Medical Officer of the Chinese Grand Prix, Prof. Shiyi Chen, have ruled that Fernando Alonso is fit to take part in all remaining sessions this weekend," a statement from the FIA read.

"However, as with this morning's session, in case of any abnormal symptoms the driver has been informed that he must stop his car immediately.

"As the driver has been cleared to take part, no further medical checks will be undertaken unless the driver presents any abnormal symptom."

"I feel good. Obviously Bahrain, I was mentally 100 per cent ready to race, but physically I had a lot of pain. In Bahrain I was ready to try and see if the pain was manageable with the broken rib," Alonso said in Shanghai.

"Now, the situation has improved a lot. I am mentally 120 per cent now, but physically 100 per cent with no pain in the last couple of days.

"I have been training more or less my normal routine in the past two weeks. I slept okay for the past two weeks which was quite a good thing because in the first 10 days after Australia I could only sleep on one side and that was not very comfortable."

Alonso was replaced in Bahrain by Stoffel Vandoorne, McLaren's reserve driver, who out-qualified Jenson Button before scoring the team's first point of the season after he crossed the line in 10th. 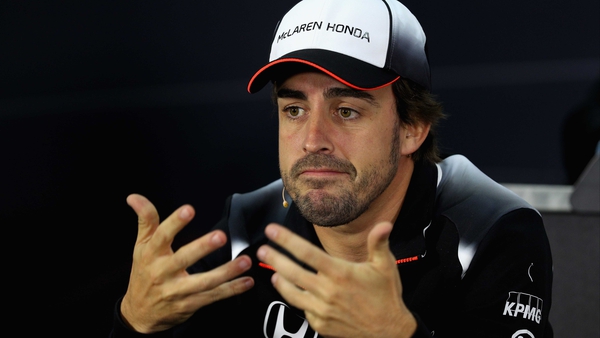