Valentino Rossi’s hopes of claiming a first MotoGP World Championship title since 2009 were dealt a serious blow on Thursday.

The Court of Arbitration for Sport (CAS) ruled that the Italian will have to start at the back of the grid in Sunday’s title-deciding race in Spain.

Rossi received the punishment of back-to-back grid penalties after he was found to have kicked Marc Marquez off his motorcycle during the recent race Malaysia.

The pair clashed going around a bend, with Rossi aiming a kick at his Spanish rival to send him sliding to the tarmac.

He contested the decision to put him to the back of the grid, arguing before the CAS that he should be allowed to race on equal terms with fellow title challenger Jorge Lorenzo pending a further appeal

However, MotoGP said in a statement that the Lausanne-based court had issued an order dismissing Rossi's application for a stay of execution.

"As a consequence of this ruling Mr Rossi will start from the last position on the grid," read the statement.

Seven points separate championship leader Rossi and his second placed Yamaha team mate Lorenzo as they go into the last race of the season.

If he finishes the race ahead of Lorenzo he will be crowned champion of a sport that he once dominated, but hasn’t taken the title in for six years.

However, this will be difficult given his last-placed grid position. If Lorenzo finishes on the podium, Rossi would need to finish no worse than one place behind him.

If Lorenzo misses out on a top-three finish, Rossi has a bit more wiggle room and if the Spanish rider finishes tenth-or-lower, the Italian will take the crown regardless.

The controversy has caused unexpected results, causing one sponsor to pull out of MotoGP.

Watch company Sector No Limits said in a statement that its brand values had always been 'sportsmanship, challenge, healthy competition and integrity'.

The firm added that it had decided to leave the sport at the end of the season because it 'could not identify with the events of recent weeks in the world championship'. 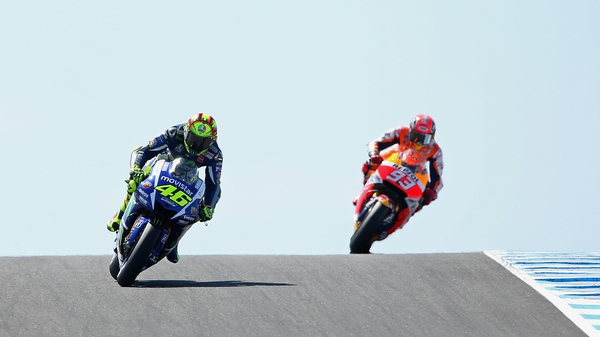 Valentino Rossi appeals to Court of Arbitration for Sport over punishment