Mischievous Sebastian Vettel has called on Lewis Hamilton and Nico Rosberg to crash into each other at the opening corner of Sunday night's Mexican Grand Prix.

Rosberg, who sealed his fourth consecutive pole, will have his Mercedes team-mate Hamilton for company on the front row on Formula 1's return to Mexico after a 23-year break.

A furious Rosberg accused Hamilton of driving ‘extremely aggressively’ after the pair banged wheels on the exit of turn one in last week's United States Grand Prix.

Hamilton, who went on to win and clinch his third championship, emerged in the lead while Rosberg lost four places.

Asked if the Mercedes pair would discuss the start ahead of Sunday's race, Rosberg said: "It's no different, you know.

“It is always going to be a battle and what's in the past is in the past and now we move forward, it doesn't change."

Hamilton, sitting alongside his team-mate, and who is now on a five-race streak without securing pole, added: "The same as he's just said."

Vettel then joked: "Can you make sure you take both of you out so I can go through? Yes? No? I tried."

Neither Rosberg or Hamilton responded to Vettel's jibe.

While Hamilton has built an unassailable lead in the championship, Vettel is four points clear of Rosberg in the battle to be this year's runner-up.

The Ferrari driver ended Saturday's qualifying session less than two-tenths of a second slower than Hamilton but said he was expecting to closer to his Mercedes rivals.

"We were hoping for it to be a bit closer but in the end it wasn't," said Vettel, the four-time world champion.

"I tried everything. I was very happy with the first attempt in Q3. On the second one I probably pushing too hard and I didn't go any faster.

"In the end they were just a sniff too quick. But who knows what happens tomorrow."

Meanwhile, Mercedes boss Toto Wolff will not speak to Hamilton and Rosberg about their first-corner conduct in Mexico.

The 900-metre stretch down to turn one at the newly-revamped Autodromo Hermanos Rodriguez makes it the longest on the Formula One calendar.

But Wolff has no plans to speak to his drivers about how they handle the corner.

"There is no need to discuss it," said Wolff. "We have had conversations regularly and we have had discussions after Austin and they are both absolutely aware of the situation.

"We want to see them race and not pre-agree before the race started who goes first through the corner and who goes second. It would make the whole thing a lot less exciting.” 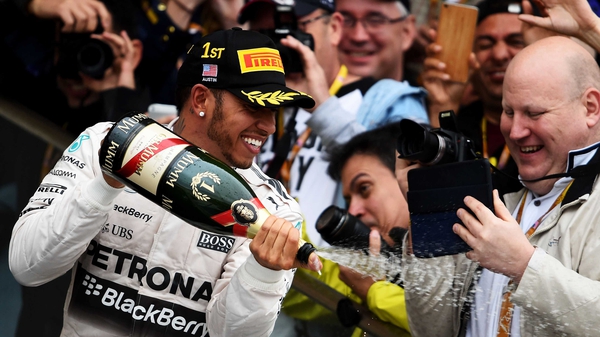