It has emerged that Marquez filed an official complaint after he and his family were allegedl physically attacked at their home in Cervera near Barcelona.

Representatives of the Honda rider published a statement in Spanish media on Saturday which said ‘a group of people’ had turned up at the Marquez residence on Friday.

They did not identify them but local media said they were Italian journalists from a programme called 'Le Iene' (The Hyenas) broadcast by the Mediaset group.

“They hurled a series of insults, performed certain humiliating and ridiculous actions towards the rider and even pushed and attacked his closest family members," the Marquez statement said.

"Given the seriousness of the events, the actions have been reported and will follow the normal course of a legal complaint against these people," it added.

Marquez clashed with Italian Yamaha rider Rossi at last weekend's Malaysia Grand Prix, when Rossi was sanctioned with three penalty points for kicking the Spaniard off his bike.

As things stand, Rossi will start the final grand prix of the season in Valencia, Spain, next weekend at the back of the grid because of the punishment, although he has appealed to the Court of Arbitration for Sport (CAS).

The Le Iene official Facebook page carried a statement from two of the programme's reporters, Stefano Corti and Alessandro Onnis, which said they had gone to the Marquez home to present him with a tongue-in-cheek trophy.

"We arrived in the vicinity of the home of the rider's parents where we came across Marc Marquez, his father, his brother and a friend," the statement said.

"When we tried to present our trophy we were attacked and in the scuffle they broke the camera and tried to take the video card," it added. "Perhaps they wanted a bigger cup."

The two reporters had gone to a hospital to be treated for 'injuries sustained', the statement concluded. 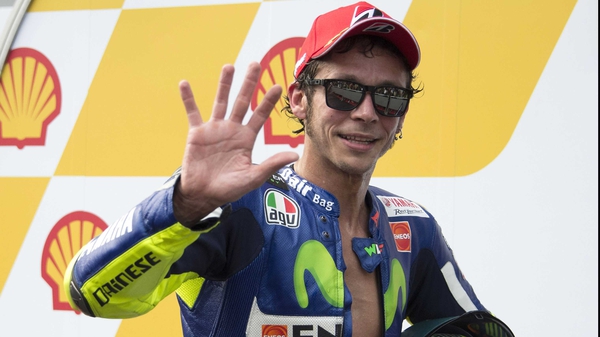 Valentino Rossi says he will race in Spain despite penalty