Qualifying for the United States Grand Prix has been postponed until Sunday morning after heavy rain continued to wreak havoc with the Formula One schedule in Austin.

Saturday's session was delayed for three hours before the FIA, the sport's governing body, eventually called an end to proceedings at 4.0pm.

Lewis Hamilton, who is bidding to win his third world championship here, and the rest of the field will now return at 9.0am local time (2.0pm GMT) to settle the grid for Sunday's race.

Continued overnight rain saw officials at the Circuit of the Americas track urge fans not to descend on the venue for final practice on Saturday morning amid safety fears.

But the session went ahead as scheduled, and as such was played out in front of an empty theatre with Hamilton, who will win the championship if he outscores Sebastian Vettel and Nico Rosberg by nine and two points respectively, posting the fastest time.

Circuit bosses then threw open their gates to its paying public for qualifying which was scheduled to get under way at 1.0pm local time (7.0pm GMT) - but it was eventually canned three hours later.

In a bid to keep morale high among the fans who bravely stood in the swirling wind and persistent rain, a number of drivers took part in comical stunts in the pit lane.

The Red Bull duo of Daniel Ricciardo and Daniil Kvyat performed a dance together, Nico Rosberg played keepy-upy with Mercedes boss Niki Lauda, while Hamilton scaled the pit wall to wave to fans in the main grandstand.

At one stage Max Verstappen's father Jos, who raced in Formula One in the 1990s and Carlos Sainz's father - a two-time world rally champion of the same name - pulled on a pair of Toro Rosso overalls before sitting in their respective son's cars.

A Force India mechanic performed a brake-dance in the team's garage while members of Sauber 'pit-surfed' and some of the Williams team were seen improvised rowing in the pits.

But it is likely to come as little sympathy to fans who would have paid a minimum of #110 for three-day tickets and already seen two of the four scheduled sessions cancelled.

Indeed boos rang out from the main grandstand as the news that qualifying had been re-scheduled for Sunday was confirmed. 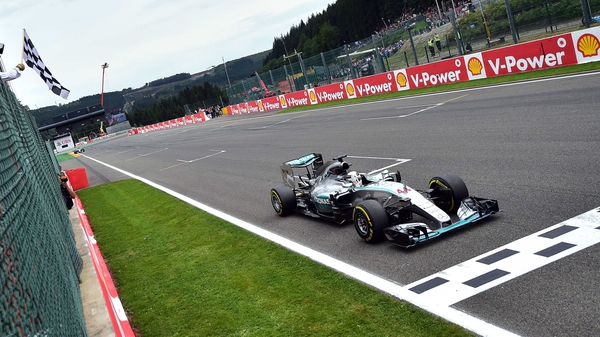 Lewis Hamilton backs calls to spice up Formula One