Lewis Hamilton's hopes of winning his third Formula One world championship at the U.S. Grand Prix were boosted on Thursday when closest rival Sebastian Vettel said he would have a 10 place penalty on the starting grid.

Vettel's Ferrari team mate Kimi Raikkonen will take a similar penalty, which will further reduce the team's chances of beating Hamilton's Mercedes unless the weather, which is expected to be wet, intervenes.

"We will have the hit of a 10 places penalty for a new engine at this event but it has always been the plan, it's not a big secret," Vettel told reporters at the Circuit of the Americas.

"Obviously if you look at just this race in isolation, for sure it's not great news but then you have to look at the whole project, the whole season and it was always the plan to have a fresh engine until the end of the season (from) here," added the German.

Britain's Hamilton, who has won nine of the 15 races so far, leads Vettel by 66 points in the standings with four races remaining.

His Mercedes team mate Nico Rosberg is 73 points adrift, which means Hamilton needs to score nine points more than Vettel and two more than Rosberg to be sure of his second successive crown.

A Mercedes one-two, with Hamilton winning, would do that but Rosberg said the Briton would still face a battle with him in Sunday's race.

"There is nothing to lose. I want to win and I have the opportunity to win," said the German.

"It makes it more simple for us, the weekend," he said of Ferrari's penalties. "But they are still a threat even from where they are because you never know with the weather or whatever."

Hamilton has won two of the three races in Austin to date and three of the last four in the United States, with Vettel taking the other.

Vettel has won three grands prix this year, the same number as Rosberg, and he and Hamilton are the only drivers to have won in Austin since it first hosted the championship in 2012.

The German, who won his four world championships with Red Bull, has also started twice on pole in Texas.

The new engine will be Vettel's fifth of the season, incurring a penalty because it exceeds the allocation of four, but Ferrari have already hit their targets for the season after failing to win a race last year.

"The priority was always to have maximum power at every single race and that has been our plan and I think it worked very well so far," said Vettel.

"Obviously we have to take the hit here but then we should see the positive and the fact we were able to make big steps." 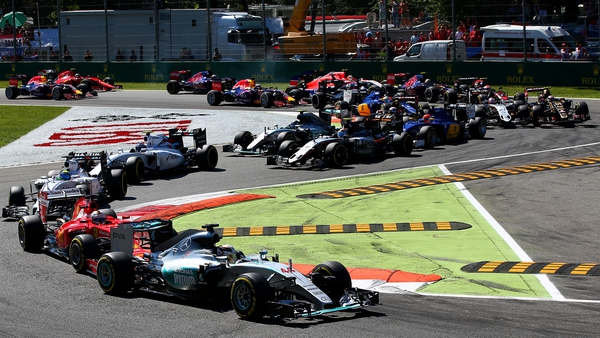