Saturday’s session was red flagged after Kvyat lost control of his Red Bull on the exit of turn 10 and crashed heavily into the barriers at 120mph.

His car was launched into the air and completed a 360 degree spin before it landed upright.

The left-hand side of Kvyat's Red Bull was completely destroyed and his team will now work through the night to change his chassis so he can take part in the race.

The Russian qualified 10th but will begin his race in the pit lane following the repair job.

"I am massively sorry for the guys who will have to do quite a job," said Kvyat, who was given the all-clear to take part in Sunday's race after a brief visit to the on-track medical centre.

"The car did not look great so I will be supporting them tonight. I am not as good at building the car as they are but I will stay with them as long as I can because I feel sorry for them."

Bianchi died in July after he succumbed to the horrific brain injuries he sustained after crashing into a recovery vehicle in the rain-hit race 12 months ago.

Explaining the incident, Kvyat said: "It was a rookie mistake, I put two wheels on the grass and that's it.

"It was by far the hardest crash I have had. I have never had a crash in my career until now - maybe karting - but I have never rolled the car. Unfortunately there is a first time for everything."

Kvyat's Red Bull team-mate Daniel Ricciardo, who qualified seventh, added: "It was spectacular and got everyone talking, but it is good he is okay.

"It is a silly accident but it is easy to do. As a driver you try to be greedy and use as much of the track as possible as it is the quickest way to go, but it is sometimes easy to happen - as silly an accident as it is - because you are only using your peripheral vision to see the outside of the track. 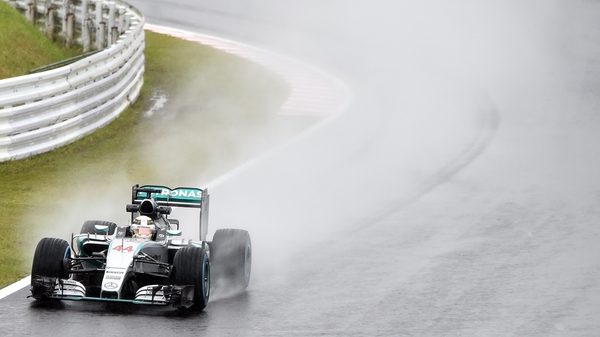