Sergio Perez walked away unscathed from a high-speed crash in Friday's opening practice session for the Hungarian Grand Prix.

The Mexican driver suffered a rear suspension failure and lost control of his Force India on the exit of turn 11 before hitting the barriers on the opposite side of the track.

Perez's right-front wheel then appeared to get caught underneath his Force India which flipped his car. The former McLaren driver was prompt to inform his team he was "okay" before clambering out of his car.

The harrowing incident, which happened one hour into the 90-minute session, comes with the Formula One community mourning the loss of Jules Bianchi who died last Friday.

Friday's session, the first on-track action since Bianchi succumbed to the devastating injuries he sustained at last year's Japanese Grand Prix, was immediately red flagged and a medical car was sent to the scene.

Perez was swiftly taken to the medical centre as a precaution but emerged waving to the grandstands.

"It was a really bad accident, pretty unlucky," said Perez. "The track was dirty and I went on the astroturf and I collided on the other side of the track at a very bad angle, so it made the car roll over.

"But everything's all right. It was a strange accident. I thought it was under control but the astroturf was very dirty which is why I went in the wall. We'll have to check everything in detail."

The session restarted with a little over 18 minutes remaining and it was Lewis Hamilton who led the way.
The world champion, a winner last time out at the British Grand Prix, picked up where he left off ending the morning on top of the timesheets with a fastest lap of one minute 25.141 seconds.

Raikkonen's session was then brought to a premature end however, after he suffered a front left tyre puncture which caused bits of his Ferrari front wing to scatter the track.

The incident-hit session was suspended once more as marshals removed the debris from the circuit. 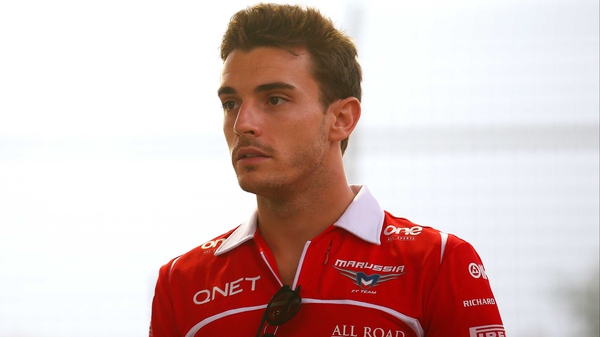