World rally champion Sebastien Ogier won three of Friday's eight stages to extend his overall lead on the second day of the Mexico Rally in Guanajuato.

Frenchman Ogier secured an overall lead of 1.2 seconds after winning one of Thursday's two opening stages and extended his advantage by winning stages four, six and 10 on Friday.

M-Sport's Welsh driver Elfyn Evans (1:42:45.5) is fifth overall, while Northern Ireland's Kris Meeke (Citroen) won the opening stage of the day, but crashed out of the next stage and is 26th overall.

Ott Tanak also crashed out of stage four and had a narrow escape when his car left the track, plunged into a reservoir and subsequently sank.

"If you are in a lake, close to the limit of your life and fighting for it, when you finally win that fight it's an amazing feeling," Tanak told www.wrc.com.

"I opened the seat belts and immediately after opening the door the car filled with water. Then it went down in a short time."

The Estonian went on to reveal that he expects his M-Sport car to be retrieved in time for him to take part in Saturday's action, which consists of eight stages. 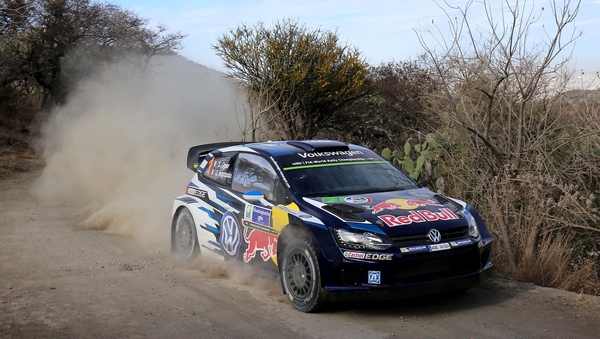