Sebastien Ogier stands on the brink of retaining his World Rally Championship title in Spain and admits "it's starting to look good".

The French driver takes a lead of 27.3 seconds into Sunday's final four stages and will wrap up a successful defence of his crown ahead of next month's Wales Rally GB providing he stays ahead of Volkswagen team-mate Jari-Matti Latvala.

Latvala had a strong Saturday on the Spanish asphalt, with his car the quickest on four of the six stages, but the second-placed Finn could only bite into Ogier's overnight lead by 9.3 seconds.

"The plan was to control, but I must congratulate Jari-Matti on his drive today," Ogier said.

"He did well. In some sections I wasn't controlling much.

"Pressure is part of my job and Jari-Matti kept us driving fast because he was flying."

Ogier added: "Now it's starting to look good. My plan was to have a 20-second advantage tonight. I'm happy to have more than that."

The 30-year-old topped the time sheets on stage 11, despite experiencing tyre trouble on the sizzling hot road, but was otherwise content to be in close contact with Latvala. On the five other stages contested on Saturday, Ogier was in the top three every time.

Andreas Mikkelsen, also in a Volkswagen, was fastest over the final stage of the day, a dash along the seafront in the Catalonian resort of Salou.

Latvala was a fraction behind, with Ogier next.

And Ogier's consistent driving has left Latvala on the point of conceding the title.

Latvala told the WRC website: "I have to be pleased, overall it has been a good day, but I'm a bit disappointed that yesterday wasn't better. I wanted to fight for the win and now it's a little bit too far away. I was too aggressive yesterday."

Latvala's compatriot Mikko Hirvonen sits third heading into the final day, a minute and 18.6 seconds adrift in his Ford, while Citroen's Norwegian driver Mads Ostberg holds fourth, ahead of Hyundai's Dani Sordo, benefiting from local knowledge in his native Spain. 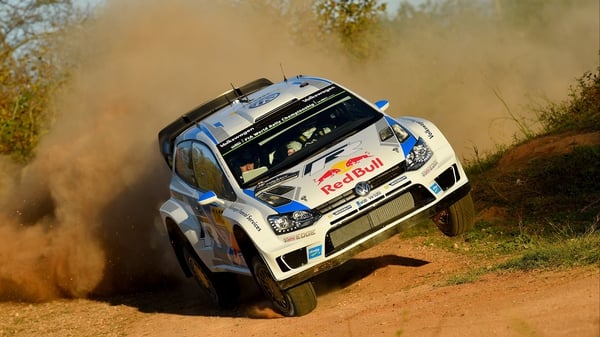