Jules Bianchi is in a "critical but stable" condition following his accident at Sunday's Japanese Grand Prix.

The Marussia driver was left requiring surgery on a severe head injury after his car ploughed into the back of a tractor which had been rescuing the stricken Sauber of Adrian Sutil, who had spun off the Suzuka circuit on the previous lap.

An ambulance was sent to the scene immediately after Bianchi's crash, which had knocked him unconscious, and the 25-year-old Frenchman was taken to the Mie General Medical Center in Yokkaichi.

A spokesperson for the FIA, Formula One's governing body, said on Monday that Bianchi's condition was "critical but stable" and it is understood his family will finally see him on Tuesday after being delayed in getting to him due to Typhoon Phanfone.

Earlier on Monday, Marussia issued a statement giving thanks for the support Bianchi had received.

They also asked for "patience and understanding" with regard to further medical updates after an initial one was released by the FIA on Sunday confirming the driver suffered "a severe head injury" and was to undergo surgery before being moved to intensive care.

Marussia's statement read: "Following the accident involving Jules Bianchi during yesterday's 2014 Formula One Japanese Grand Prix at Suzuka Circuit, the Marussia F1 Team would like to acknowledge the huge outpouring of support and affection for Jules and the team at this very difficult time.

"With regard to the communication of information concerning Jules' medical condition, we will respect, and be guided by, the wishes of the Bianchi family. Together with Jules' care, they will remain our highest priority.

"Therefore, we would ask for patience and understanding with regard to further medical updates, which will be communicated in conjunction with the Mie General Medical Center in Yokkaichi, where Jules is being treated, when they feel it is appropriate.

"Representatives of the Marussia F1 Team and Scuderia Ferrari will remain at the hospital to support Jules and the Bianchi family."

"I was already screaming on the radio five laps before the safety car that there was too much water on the track, but they took a bit too long and it was dangerous" - Felipe Massa

The F1 season moves on to Sochi in Russia for next weekend's race and it remains to be seen whether or not Marussia will take part.

Bianchi's crash saw Sunday's event halted at lap 44, with victory being awarded to Lewis Hamilton, who has opened up a 10-point lead in the championship over his second-placed Mercedes team-mate Nico Rosberg with four races remaining.

Sunday's race had been under threat of cancellation in the build-up as Typhoon Phanfone headed towards Suzuka and the wet weather led to it being red-flagged after just two laps, despite starting under safety car conditions.

Once enough standing water had been cleared to allow the race to begin in earnest, Briton Hamilton caught and passed Germany's Rosberg on lap 29 before disappearing into the distance.

The rain then came down again, driving conditions deteriorated and Bianchi crashed out, prompting the red flags to return and the race to be ended with nine laps to go.

Williams driver Felipe Massa has said he had been "screaming" over his radio during the race about the amount of water on the track, but former FIA president Max Mosley believes "everything was done as it should have been" in relation to safety.

Asked if F1 is doing everything right to secure the safety of its drivers, Mosley told Sky Sports News HQ on Monday: "I think it is.

"I think what happened in Suzuka was very unfortunate, a freak accident.

"But I can't really fault any of the people involved - the marshals or the race director, any of those people. I think everything was done as it should have been."

Massa said he was trying his best to get the race called off in the run up to Sutil and Bianchi's accidents.

"I was already screaming on the radio five laps before the safety car that there was too much water on the track, but they took a bit too long and it was dangerous," the Brazilian said on Sunday.

A subdued Hamilton said: "Our first thoughts go to Jules.

"It overshadows everything else when one of our colleagues is injured and we are praying for him. Next to this, the race result doesn't seem significant at all.

"Nico and I had a tough battle, we were pushing really hard... But like I said, that's not what matters - our thoughts are with Jules." 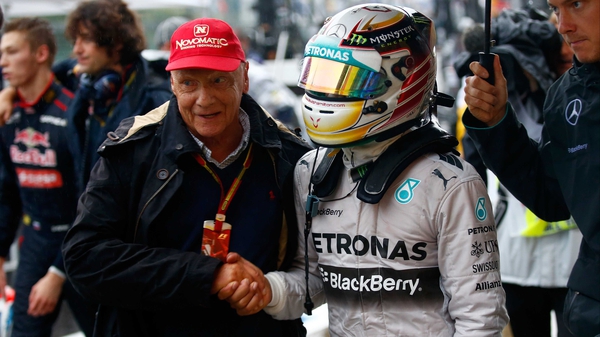 Lewis Hamilton takes to the front in Japan Grand Prix