Formula One departed Suzuka and bound for Sochi with the thoughts of everyone involved in the sport firmly left behind with Jules Bianchi - as the Marussia driver fought for his life in a Japanese hospital.

Lewis Hamilton beat Mercedes team-mate and pole sitter Nico Rosberg to victory in a race affected by rain but his now 10-point championship lead was sub-text following a Japanese Grand Prix which was ended prematurely after a freak accident left Bianchi requiring surgery on a severe head injury.

The 25-year-old Frenchman crashed into a recovery vehicle after aquaplaning off the wet track at the same corner as Sauber's Adrian Sutil, who had left the circuit on the previous lap.

Sutil's car was still being removed from the area when Bianchi reached the scene of the accident and he hit the recovery vehicle, with the race being red-flagged shortly afterwards on lap 46.

The running of the race had been under threat all week as Typhoon Phanfone approached Japan from the Pacific Ocean, and the event had already been red-flagged just two laps in after beginning under safety car conditions.

The race continued after the weather cleared up but the rain began to fall in the closing stages ahead of both Sutil and Bianchi's accidents.

All of the drivers were subdued following the event, with Hamilton, Rosberg and fellow podium finisher Sebastian Vettel all passing on their best wishes as news about Bianchi's injuries began to filter through.

"Our first thoughts go to Jules," Hamilton said. "It overshadows everything else when one of our colleagues is injured and we are praying for him. Next to this, the race result doesn't seem significant at all."

The FIA, Formula One's governing body, issued a statement alongside Marussia later in the evening confirming more details about Bianchi's crash and his condition.

"On lap 42 Adrian Sutil lost control of his car, spun and hit the tyre barrier outside of turn seven," it read. "The marshals displayed double-waved yellow flags before the corner to warn drivers of the incident.

"A recovery vehicle was dispatched in order to lift the car and take it to a place of safety behind the guardrail. While this was being done, the driver of car 17, Jules Bianchi, lost control of (his) car, travelled across the run-off area and hit the back of the tractor.

"Once the marshals reported that the driver was injured, medical teams were dispatched and the safety car was deployed. These were followed by an extrication team and an ambulance.

"The driver was removed from the car, taken from the circuit medical centre and taken by ambulance to Mie General Hospital.

"The CT scan shows that he has suffered a severe head injury and is currently undergoing surgery. Following this he will be moved to intensive care where he will be monitored."

"I was already screaming on the radio five laps before the safety car that there was too much water on the track, but they took a bit too long and it was dangerous." - Felipe Massa

Niki Lauda, who famously refused to drive in torrential rain at the 1976 Japanese Grand Prix and effectively handed the title to James Hunt in the process, defended the decision to run this year's race.

"Motor racing is dangerous," the three-time world champion said. "'We get used to it if nothing happens and then suddenly we're all surprised but we always have to be aware that motor racing is very dangerous and this accident today is the coming together of various difficult things.

"One car goes off, the truck comes out and then the next car goes off. It was very unfortunate.

"In the end the rain was not the real issue of the race. There were safety cars put in and the race was run safe more or less to the end so it could have been run to the end without the accident."

Sutil himself has since suggested the safety car should have been sent out after his initial shunt.

"The car came out to rescue my car and then it all happened," he said. "With respect to this corner, I think everyone knows this is one of the most tricky corners and when it is getting late and the rain increases, let's say when you have an accident there you should probably think about a safety car.

"It was quite difficult. In the end we got more rain and it was dark so was getting less and less (good visibility) and this corner was a tricky one the whole way through.

"In the end, when it got dark, you couldn't see where the wet patches were and that is why I lost the car and it really surprised me. It hit him hard. That is all I can say. I was just standing there. We know that it is serious at the moment."

Not since Aytron Senna died at Imola in 1994 has a driver lost their life following a crash during a race.

Felipe Massa was left in a critical state in 2009 after he was hit on the helmet, just above his left eye, by a spring that had detached from Rubens Barrichello's Brawn.

Now at Williams, Massa said he was trying his best to get the race called off in the run up to Sutil and Bianchi's accidents.

"I'm very worried," said the Brazilian. "I was already screaming on the radio five laps before the safety car that there was too much water on the track, but they took a bit too long and it was dangerous."

The Marussia team are no strangers to fatal injuries after Spaniard Maria De Villota passed away almost a year ago, with the injuries she sustained during a crash in a testing session back in July 2012 highlighted as the cause.

Hopefully Bianchi will pull through as F1 heads off to start its association with Russia, not concerned with the duelling Mercedes pair, Vettel's imminent move to Ferrari of where Fernando Alonso will drive next season - but purely on the condition of Bianchi. 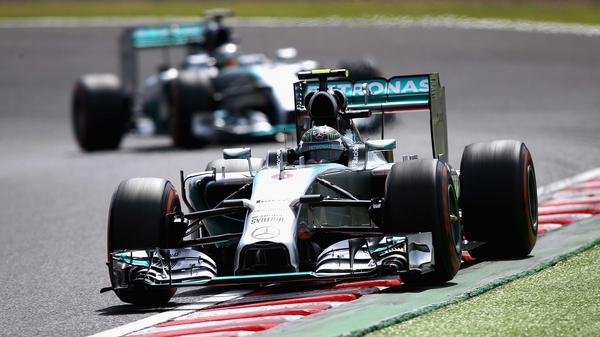