Jenson Button believes 16-year-old Max Verstappen would have been mad to turn down a Formula One drive despite criticism he is too young to race in the sport.

Verstappen has caused a stir in F1 after Toro Rosso announced this week he is to partner 20-year-old Russian Daniil Kvyat for 2015.

Just 16 at present, Verstappen will make F1 history next year when he becomes the youngest driver ever in the sport when he lines up on the grid for the season-opening grand prix in Australia in March aged 17.

Spain's Jaime Alguersuari is the current record holder at 19 years and 125 days, but Verstappen will smash that mark by almost two years.

Upon F1's return from its summer break in Belgium this weekend, the topic of Verstappen's impending arrival was naturally high on the agenda.

Button, just over twice Verstappen's age at 34 and who drove against the young Dutchman's dad Jos in the early noughties, can understand just why the youngster has said 'yes', recalling his own experience of almost turning down his chance with Williams in 2000.

"If someone comes to you and says 'Are you ready for Formula One, I'll give you a drive?', you're not going to say no are you?" said Button.

"There might not be another opportunity, and that's what happened with me at Williams.

"Frank (Williams, team owner) said to me when I was in the pub with my mates drinking beer and eating sausages and bacon 'Are you ready for Formula One?' I said no initially.

"Then my dad said 'I can't believe you just said that. Phone him back and lie to him and tell him you are ready'.

"So I did, I got the test drive and then the race drive. You've got to take the opportunity because you never know if it is going to come again."

Unsurprisingly, every driver in the paddock at Spa when asked about Verstappen said they did not feel ready for F1 when they were 17.

Double world champion Fernando Alonso, who also competed against Verstappen snr in 2001, said: "Probably I was not ready.

"Even if you feel you are ready - and if I felt at that time at 17 I was ready - now with 14 years' experience in F1 you know there are things you need to improve on and that you learn with time.

"We'll see, and we'll know after the first part of next year who is ready and not ready."

Kimi Raikkonen jokingly admitted to feeling "old" when asked for his thoughts on the fact that having competed against the father he will now be going up against the son.

Raikkonen, 35 later this year, at least appreciates the jump for Verstappen as he only drove in 23 single-seater events before being handed his F1 chance.

Verstappen, however, was only in karts last year, progressing to the European Formula 3 Championship for this season in which he is currently second after 12 races.

"I did one full year (in single-seaters), I only had 23 races so he's probably going to have more than I had," said Raikkonen.

"Obviously I was a bit older than him (in arriving in F1), but I did well.

"Time will tell how he will do, but obviously it's more simple now than it was in the past.

"You can prepare yourself more easily, so I don't think there will be issues, but obviously time will tell. Hopefully he will do well for himself." 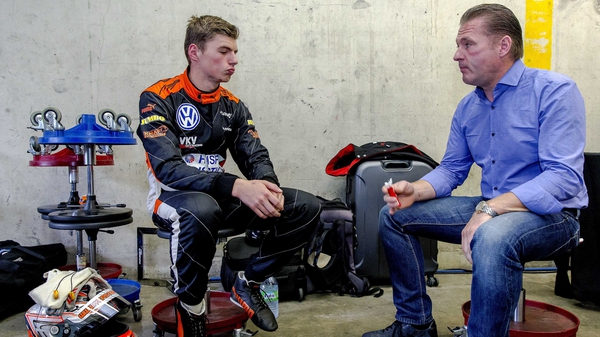