Formula One leader Nico Rosberg put Mercedes on pole position for his home German Grand Prix on Saturday after a brake failure dumped title rival and team mate Lewis Hamilton out of qualifying.

Hamilton, who is four points behind Rosberg in the standings after nine of 19 races, ended up sore and 16th after a heavy crash but should start 15th when a penalty is applied to Sauber's Esteban Gutierrez ahead of him.

Finland's Valtteri Bottas joined Rosberg on the front row for Mercedes-powered Williams, with Brazilian team mate Felipe Massa qualifying third on a searingly hot afternoon at Hockenheim with temperatures in the 50s Celsius.

The pole was Rosberg's fifth of the season, fourth in the last five races and ninth of his career, but less satisfying than some.

"Of course I would have preferred it if it was an open fight with Lewis, so a little less happy as a result because Lewis didn't have a shot at it again"

"It's great, a home race and to be on pole is fantastic," the 29-year-old, who got married last week and signed a new multi-year contract with Mercedes while also celebrating Germany's soccer World Cup win, told reporters.

"Of course I would have preferred it if it was an open fight with Lewis, so a little less happy as a result because Lewis didn't have a shot at it again," said Rosberg.

Red Bull's quadruple world champion Sebastian Vettel, a home winner last year when the race was held at the Nuerburgring, will line up sixth and behind Australian team mate Daniel Ricciardo in fifth place.

Victory on Sunday would make Rosberg the first German to win his home grand prix in a German car since Rudolf Caracciola in 1939, as well as the first driver in 60 years to win in Germany for a works Mercedes team.

With five of the eight races to date at the redesigned circuit won from pole, Rosberg also knows he has a great chance to extend his lead considerably although the weather could play a hand.

"It is supposed to be a bit colder (on Sunday), so it should make it easier on the tyres. The weather could play a role, so I just need to take it as it comes," said Rosberg.

The German had been fastest in final practice, after Hamilton had been top of the timesheets on Friday, with Saturday expected to be another duel between the top two for pole but it did not turn out that way.

The Briton provided the early drama when he crashed heavily at the Sachs Kurve section of the stadium complex, where Mercedes have a grandstand, bringing out red flags to stop the session in the first phase of qualifying.

The team blamed a right front brake disc failure for the accident, with a puff of smoke visible before the car spun and was pitched into the tyre wall.

Hamilton - who uses a different brand of brakes to Rosberg as a matter of personal choice - stepped out of the car and was taken to the medical centre before returning to the paddock, declared OK but sore.

The crash continued a run of bad luck for 2008 champion Hamilton, who has retired from two races this season through no fault of his own while Rosberg suffered his first blank in Britain two weeks ago. 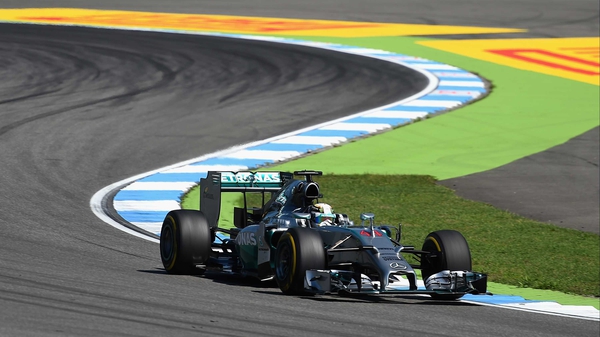