Lewis Hamilton has suggested his under-privileged upbringing has made him hungrier for this season's Formula One world title than team-mate Nico Rosberg.

Hamilton may now have all the trappings of wealth that come with his celebrity status, but throughout his formative years until the time when he was handed a contract with McLaren from 2007 that was far from the case.

Hamilton's surroundings were exceptionally modest, with father Anthony at one stage holding down three jobs in order to pay for his son to travel the country and pursue his early karting ambitions.

As for Rosberg, the son of 1982 world champion Keke, he has lived all his years in Monaco, and so it can be claimed he has known nothing other than the good life.

Rosberg has even spoken of the times his father walked him to school along roads that form part of the principality's street circuit, scene of this weekend's latest showdown.

To that extent, one German newspaper recently suggested Rosberg was too soft to go toe-to-toe with Hamilton over the course of a title fight.

As 2008 world champion, and winning the crown in the manner he did - with an overtaking manoeuvre on the final corner of the last lap of the concluding race of the season - it would suggest Hamilton has the killer instinct and can go the distance.

"Let me tell you this: I come from a not-great place in Stevenage and lived on a couch in my dad's apartment," said Hamilton.

"Nico grew up in Monaco with jets and hotels and boats and all these kind of things, so the hunger is different.

"I want to be the hungriest guy in the cockpit from all 22 of us - even if every driver has to believe he's the hungriest.

"If I were to come here believing Nico is hungrier than me then I might as well go home.

Hamilton goes into Sunday's Monaco Grand Prix with a slender three-point cushion over Rosberg after winning the last four grands prix in which the German has been runner-up.

On a rain-affected practice day, Hamilton and Rosberg again led the field, with the Briton just 0.032secs ahead of the 28-year-old.

That was despite what Hamilton has described as a "frantic" start as he has revealed he "overslept", resulting in him being seen jogging to the track minutes prior to the start of FP1.

That did not stop Hamilton drawing first blood with Rosberg, who a year ago achieved a clean sweep in finishing top of the times in all three practice sessions and qualifying before winning the race.

Hamilton is now eager to claim what would remarkably be his first pole position in eight attempts here, even though he is fourth on the all-time standings with 35 to his name.

And Hamilton has made no secret of the fact as to how he would like matters to unfold on Sunday in a bid to put daylight between himself and Rosberg.

Asked by the official website, formula1.com, as to what would be his dream result, Hamilton replied: "Finishing first, Fernando (Alonso) finishing second and Sebastian (Vettel) finishing third.
That would be it for me.

"The dream result for the team would be the Mercedes cars finishing one-two, and one of those guys in third."

Come second practice, and after a heavy downpour beforehand, there was virtually no activity for 40 minutes, much to the derision of the fans who made their feelings plain.

The drivers, however, were not keen to risk an accident, and it was only in the last few minutes the disgruntled spectators saw a full complement of cars on a dry track.

Ferrari's Fernando Alonso was quickest, four tenths of a second up on Hamilton, but with a time two tenths down on the Briton and Rosberg from FP1.

Overall, Hamilton was content as he said: "Generally it's been a really good day, with the car behaving a lot better here than it was last year for me."

Red Bull at least suggested they could push Mercedes a lot closer than they have in recent races given the track is more suited to cars with high downforce than outright power.

Daniel Ricciardo and four-times champion Sebastian Vettel were both in close attendance, and along with Alonso may yet push Hamilton and Rosberg hard in qualifying on Saturday following Monaco's traditional rest day on Friday. 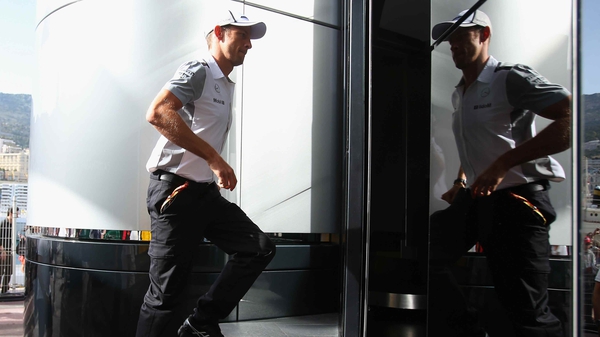