Despite all the negativity that has swirled around Formula One this season, what unfolded at the Bahrain International Circuit was a humdinger of a race.

Mercedes were utterly dominant, crushing their rivals into the desert sand that surrounds what is now an illuminated citadel of speed as the track staged its first night race to celebrate its 10th anniversary.

But spectators could barely look away given the wheel-to-wheel action that unfolded from lap to lap, the event in stark contrast to that a week ago in Malaysia which handed the dissenters ammunition to further criticise.

Come the conclusion, just a second separated Hamilton and Rosberg, the former taking the chequered flag for the 24th time in his F1 career, while for Mercedes it was a heart-stopping second successive one-two.

Ahead of F1's 900th grand prix, FIA president Jean Todt, F1 supremo Bernie Ecclestone and Ferrari president Luca Di Montezemolo had all expressed their opinions on the current state of the sport.

Ecclestone had claimed F1 had become "unacceptable" to the fans; Di Montezemolo bemoaned the lack of noise and its level of so-called taxi driving with regard to drivers being forced to save fuel.

Todt is prepared to raise the decibel level to appease the naysayers on that subject, but he is not prepared to change regulations after just two races because some are unhappy with Mercedes' early form.

That will be music to the ears of Mercedes motorsport boss Toto Wolff and his two sparring drivers, Hamilton and Rosberg.

From the moment they locked out the front row, with Rosberg on pole by a quarter of a second from Hamilton, the prospect of a captivating battle was always on the cards.

Undoubtedly, there were moments when Wolff, and everyone involved in Mercedes' emergence as this season's powerhouse would have had their hearts in their mouths.

The first of those was on lap one and the first few corners, with Hamilton ekeing ahead of his team-mate on the run down to the first turn.

Come corner four at the end of the first long straight, Hamilton had the racing line, holding off Rosberg who was forced off the circuit to avoid contact.

Try as he might, Hamilton was unable to shake Rosberg off his tail, and as the first pit-stop approached and with tyres wearing, the duo clashed on lap 17.

At one stage Rosberg managed to get his nose in front, only for the Briton to cut back on the inside and the duo to brush rubber before they continued to dice as the lap unfolded.

Hamilton then pitted after 20 laps, taking on a new set of the faster soft tyres, whilst Rosberg was in two laps later, switching to the fractionally slower medium Pirelli rubber.

It appeared it would prove crucial because on lap 41, and with Hamilton almost 10 seconds ahead of Rosberg, all his hard work was undone by a moment of wrecklessness from Pastor Maldonado.

Heading into turn one, the Venezuelan in his Lotus T-boned Sauber's Esteban Gutierrez, sending the Mexican into a somersault.

Gutierrez was fortunate his written-off car righted itself, and lucky also he emerged unscathed.

However, the incident brought the safety car into play, resulting in the leaders making their second stops, with Hamilton forced to take on the medium tyres and Rosberg the softs.

It appeared game over for the former.

As they ran behind the safety car, Hamilton and Rosberg were told by executive technical director Paddy Lowe to bring both cars home.

And they did, but only just, albeit keeping their racing clean, with Hamilton producing a superb performance on the slower rubber to keep Rosberg at bay.

Behind the duo, there were overtakes and close-shaves galore, with plenty of enthralling moments to knock the critics into a cocked hat.

Force India's Sergio Perez emerged the best of the rest, ahead of Red Bull's Daniel Ricciardo, the Australian himself dicing with team-mate Sebastian Vettel over the closing laps.

The reigning world champion had to settle for sixth behind the second Force India of Nico Hulkenberg, with Williams duo Felipe Massa and Valtteri Bottas seventh and eighth.

Di Montezemolo would not have been happy with his team's ninth and 10th places for Fernando Alonso and Kimi Raikkonen, respectively.

As for Jenson Button, on the occasion of his 250th grand prix, he retired in his McLaren two laps from home. 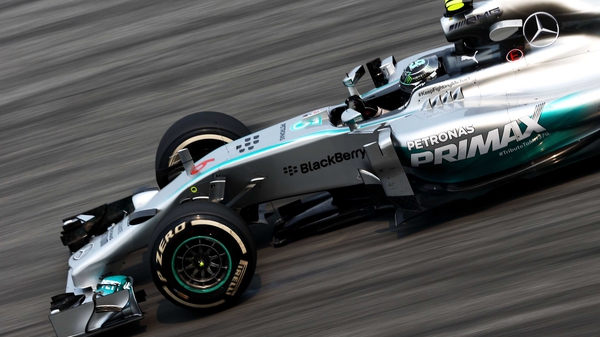 Rosberg gets the better of Hamilton