Despite Lewis Hamilton starting the race from pole position, it was Rosberg who took the chequered flag due to his Mercedes team-mate retiring after three laps with a cylinder failure.

Rosberg was never troubled from that point as instead all the action and the wars of attrition in terms of reliability took place behind him.

The 28-year-old German finished 23 seconds clear of Daniel Ricciardo on his debut for Red Bull, and to the delight of fellow Australians in the Albert Park crowd in Melbourne.

Driver of the day was arguably Kevin Magnussen, the 21-year-old Dane on his F1 debut with McLaren, as he completed the podium trio.

That was not only an astonishing result for Magnussen, but also for McLaren after failing to claim a podium finish last season for the first time in 33 years.

As for team-mate Jenson Button, the veteran came home fourth after starting the 58-lap race from 10th.

There were always going to be thrills and spills at the start of this latest version of F1, and so it proved.

"At the start of the race we had no power, cars kept on passing me, and although I was down we tried to recover" - Sebastian Vettel

The sport had grown stale on the back of Sebastian Vettel's dominance and with no change to the engine regulations for eight years.

But in a bid to become greener and more relevant to today's roadcar technology, in have come the new 1.6-litre V6 turbo-charged power units.

Given their complexity, and the vastness of the rules changes, they have caused countless problems over the past two months for all the teams.

However, you would have received remarkable odds on naming Hamilton and Vettel as the first two technical retirees.

By the first turn the field was down from 22 to 20 due to Caterham's Kamui Kobayashi braking too deeply, colliding with Williams' Felipe Massa and sending both into the gravel.

By that stage pole-sitter Hamilton had dropped from first to third, initially by team-mate Rosberg and then Ricciardo.

When Magnussen also sailed past Hamilton on lap one, it was clear at that stage the Briton had a problem.

After being told to retire on lap two, but then urged soon after to "stay out, stay out, keep rolling", come the end of lap three the 29 -year-old's race was over due to the engine losing one of its six cylinders.

"I was down to five cylinders. It's a bit unfortunate, but that's racing," said Hamilton.

Trying to draw on the positives, Hamilton added: "We've got pace and we will recover from this. It's only a hiccup and there's a long way to go. At the moment I'm not concerned about anything."

Three laps later and Vettel joined Hamilton as a spectator due to a loss of power with his Red Bull.

The 26-year-old German complained on the formation lap of a lack of boost pressure, and on the opening lap he switfly dropped down the pecking order, even being passed by Marussia's Max Chilton.

By the end of lap six, like Hamilton, Vettel trundled down the pit lane and into his box, where the car was turned around and wheeled back into the garage.

"At the start of the race we had no power, cars kept on passing me, and although I was down we tried to recover," said Vettel.

"At some stage I thought there was an improvement, but then we realised we had lost power from the engine."

Although it was a miserable start to the defence of his championship, Vettel added: "We are working hard back at the factory in Milton Keynes and at Viry (base of power unit supplier Renault.

"Although we have started on the back foot we have learned an awful lot, and when the package comes together we will be competitive."

Three other less surprising retirees followed later in the race as Caterham's Marcus Ericsson fell foul of an oil pressure problem, with Lotus' Pastor Maldonado dropping out due to a turbo failure.

Lotus, who had embarrassingly qualified at the back of the grid just a year after winning this race, then had both cars out after 44 laps.

Although Romain Grosjean suffered a KERS failure, given the lack of running in testing and in practice in the build-up to this race, the team will consider the distance covered by the Frenchman as a success.

It was another Finn in sixth as Valtteri Bottas scored eight points for Williams, three more than they managed throughout the whole of last season.

Come the conclusion there were only 14 classified finishers, with Marussia's Max Chilton the last of those home, continuing his astonishing record of so far completing every one of his F1 races. 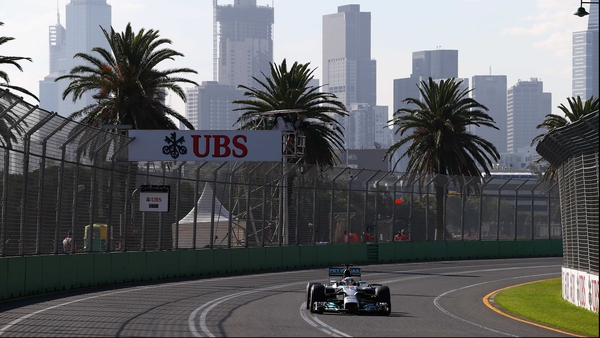 Hamilton on pole, Vettel out of top ten for Australia GP