A poor final sector around Austin's Circuit of the Americas cost Webber dear, whilst Vettel blitzed that part of the track to take the 44th pole of his Formula One career by 0.103secs.

For Red Bull, it is the team's fifth front-row lock-out of the year as their rivals were again left trailing in their wake.

Lotus' Romain Grosjean will start third, but the Frenchman finished just over eight tenths of a second adrift of four-times champion Vettel.

Sauber's Nico Hulkenberg again qualified superbly, the German taking fourth ahead of Mercedes' Lewis Hamilton - a second behind Vettel - and Fernando Alonso in his Ferrari.

With thousands of Mexican fans in the grandstands, McLaren's Sergio Perez will line up seventh ahead of Lotus' Heikki Kovalainen.

Competing in his first Q3 session since the 2009 Japanese Grand Prix, and standing in at the final two races of this season for fellow Finn Kimi Raikkonen who underwent successful back surgery on Thursday, Kovalainen produced a commendable performance.

Finland's Valtteri Bottas reached Q3 for only the second time in his maiden F1 campaign and will start ninth ahead of another Mexican in Esteban Gutierrez in his Sauber.

Gutierrez, however, may have to serve a grid penalty after seemingly blocking Williams' Pastor Maldonado in Q1, with the stewards to investigate.

Toro Rosso's Daniel Ricciardo was the man to narrowly miss out on a place in the top 10 as he was edged by Kovalainen by 0.053secs, leaving the Australian to start 11th.

Force India's Paul Di Resta was only a further 0.008s adrift of Ricciardo in 12th, the duo ahead of three big names.

Jenson Button could only manage 13th in his McLaren, but will serve a three-place grid penalty for overtaking under red flag conditions in first practice on Friday, so will start 16th.

Now ahead of the 33-year-old will be two other surprisingly lowly rivals in Mercedes' Nico Rosberg and Ferrari's Felipe Massa, along with Jean-Eric Vergne in his Toro Rosso.

Starting 17th after a qualifying to forget will be Adrian Sutil in his Force India.

The German initially struggled with traffic on two of his flying laps before finally grinding to a halt after the session had ended with what appeared to be a drivetrain issue.

Alongside Sutil will be Maldonado, the Venezuelan a staggering 1.5secs adrift of Bottas who finished top of the timesheet after the opening 20-minute Q1.

Maldonado, who is to be replaced by Massa for next season after deciding he did not want to stay at Williams, has dropped a hint Bottas is now being favoured by the team.

Given the discrepancy in times, Maldonado said: "You need to ask the guys working on the car. It is quite clear."

In the battle of the backmarkers, Caterham's Giedo van der Garde emerged top dog - 1.1secs adrift of Maldonado - and will line up 19th ahead of Marussia's Jules Bianchi.

Although Charles Pic qualified 21st in his Caterham, a five-place drop for a gearbox change means he will start at the back of the grid behind Marussia's Max Chilton, who was slowest by 0.8secs. 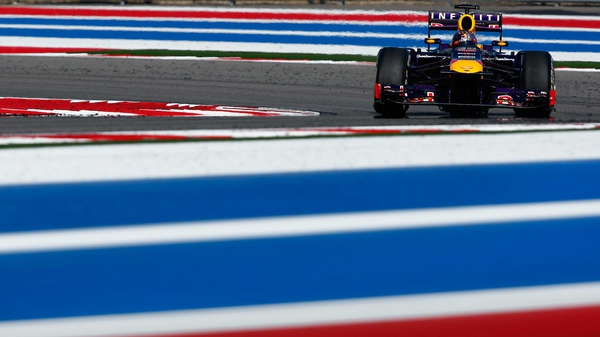 Sebastian Vettel back on top in US practice