Christian Horner has dismissed claims Red Bull's latest Formula One world title triumph is because the team have spent more money than any of their rivals.

The Milton Keynes-based marque and Sebastian Vettel became champions for a fourth successive season in India on Sunday after claiming the chequered flag for a sixth consecutive race.

Vettel and Red Bull have made short work of the opposition since the sport's summer break in August, reclaiming their crowns with a trio of grands prix still to run, starting in Abu Dhabi on Sunday.

With the celebrations over, there are naturally those who would now cast aspersions on such success, with one suggestion being Red Bull know how to splash the cash.

With billionaire Dietrich Mateschitz footing the bill, and given Red Bull have refused over the years to sign up to a resource restriction agreement that would cut costs, doubts will always linger over the team's financial outlay.

But a dismissive Horner, speaking to Formula1.com, said: "The problem of how numbers are presented is what is included and what is not.

"If you take like for like the numbers are extremely comparable with McLaren, and considering the success bonus we have paid as well, it is an erroneous assumption we are outspending every other team in Formula One.

"There are other, bigger spenders.

"It is very easy to say Red Bull spends the most money in Formula One. That is factually incorrect."

There is hope on the horizon, though, for Ferrari, Mercedes, McLaren and Lotus going into next season when significant rule changes could shake up the sport.

Red Bull's chief technical officer Adrian Newey, the design genius primarily credited for the team's current domination of F1, has conceded to taking an eye off the ball when it comes to 2014.

"You were worrying their development rate would overtake us and we could be on the back foot, so we kept pushing.

"Equally, if we had gone the other way and backed off too early and been pipped, we would have felt very sick."

Mateschitz, however, sees no reason why the push in development of this year's car will hinder their progress for 2014 when new 1.6-litre V6 turbo-charged powerplants replace the current 2.4-litre V8s.

"It has always been our plan and strategy to develop the car constantly, to bring in new parts for every race, to keep the development work permanently on top level," said Mateschitz.

"This worked out again, and we do not believe this is just an investment in this year's campaign, but will also benefit us for next year.

"Though we have different conditions in 2014, I assume 50 per cent of the recent development work will help us next season, plus-minus a couple of percents.

"The rest is open, and it might go wrong, but we have a solid basis to work on."

Behind Vettel and Red Bull, the fight to finish as runner-up in both the drivers' and constructors' championships is wide open.

In the drivers' standings, 38 points cover Ferrari's Fernando Alonso, Kimi Raikkonen for Lotus and Lewis Hamilton in his Mercedes.

As for the constructors, Mercedes hold a four-point gap to Ferrari, who in turn are 24 ahead of Lotus. 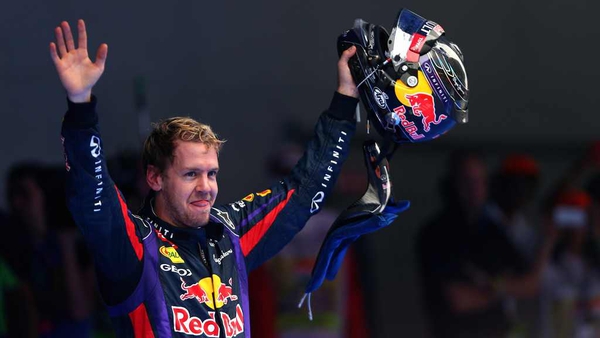