Sebastien Ogier looks set to become the first world rally champion in a decade apart from his fellow Frenchman Sebastien Loeb after taking a healthy lead into the final day of the Rally of Australia.

The 29-year-old could take an unassailable lead in the drivers' standings with three rounds of the championship remaining if he can claim victory on the dusty gravel tracks around the seaside resort of Coff Harbour, New South Wales.

Ogier won seven of Friday's eight stages to take a 20-second advantage over Citroen driver Mikko Hirvonen and extended that to 45.9 seconds over the Finn over the six stages on Saturday.

The Frenchman needs only to win nine more points than his nearest rival in the championship race, Ford's Thierry Neuville, and at least two more points than Volkswagen team mate Jari-Matti Latvala in the rally.

At the end of day three, Belgian Neuville was in third, 25.5 seconds behind Hirvonen, with Latvala in fourth a further 36.2 seconds back.

With 25 points for a rally win, 15 for third and 12 for fourth, Ogier is on course for the title, although the extra championship points up for grabs in the "power stage" - Sunday's last leg - could complicate matters.

"Really happy! Up to now the rally has been perfect for us. There is still a long day tomorrow though," Ogier tweeted.

"Great feeling with the car. No point calming down too much when I feel confident. Now I need one more day the same!"

Loeb decided to contest only four rallies this season after securing his ninth successive title for Citroen in 2012, leaving the way clear for a different champion for the first time since Norway's Petter Solberg in 2003.

Ogier grasped the opportunity with both hands in the pacy Volkswagen Polo, which is making its debut in the championship this year, and has already won five rallies with co-driver Julien Ingrassia. 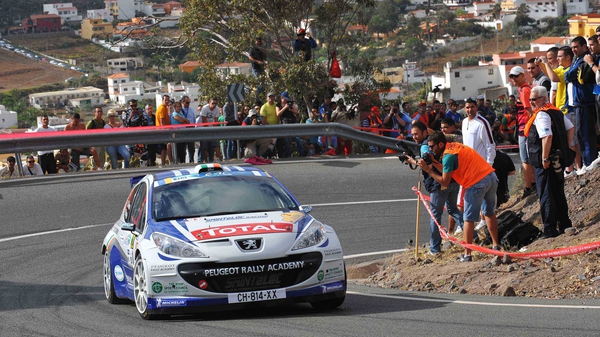