Sebastian Vettel took another comprehensive stride towards his fourth consecutive Formula One world title with victory in the Italian Grand Prix.

The race around Monza's citadel of speed was a breeze for the German, who has opened up a 53-point cushion over Ferrari's Fernando Alonso, who had to settle for being runner-up.

It was Vettel's sixth win in 12 races this season - his third around the famous old track - and 32nd of his F1 career, drawing him level with Alonso.

Vettel was at least joined on the podium by his Red Bull team-mate Mark Webber, the Australian in his final European race given he is due to quit the sport at the end of the season.

It would appear to be a two-horse race now as Lewis Hamilton could only claim ninth in his Mercedes, while Lotus' Kimi Raikkonen was 11th, the duo now 81 and 88 points off the pace.

Raikkonen started from 11th and Hamilton 12th, the latter failing to make it into the top-10 shoot-out for the first time in 67 races stretching back to the 2010 Malaysian Grand Prix.

Raikkonen's bid for a podium was scuppered heading into the opening Rettifilio chicane for the first time as the Finn ran into the back of Sergio Perez's McLaren under braking.

Forced into a pit stop at the end of lap one for a new front wing, Raikkonen dropped to 21st and what was last place as Paul Di Resta had retired after running into the second Lotus of Romain Grosjean.

With the Scot losing the front-left wheel from his Force India, it means he has now failed to score a point in his last four races.

The stewards are to investigate the incident, but with Di Resta holding his hands up to making a mistake, he is almost certain to be handed a grid penalty for the next race in Singapore.

As for Hamilton, he was running 11th when he was informed after 11 laps he had a slow puncture to his front-right tyre.

With radio issues, Hamilton failed to pit at the first opportunity, but got the message second time around after 13 laps, taking on the quicker medium-compound rubber but dropping down to 19th.

Given the early pit stops, and in a one-stop race for the leaders, Raikkonen and Hamilton were forced into making a second trip into the pits later in the race.

On both occasions, Raikkonen after 30 laps and Hamilton 38, the duo were running in fifth positions.

Hamilton's stop was a surprising one, though, as the lap earlier he had set the fastest of the race.

Aware, however, Hamilton was never going to run for 40 laps on one set of medium-compound tyres, Mercedes had no choice but to bring him in again.

With both taking on the faster mediums again, and with those around them on the hard rubber, it at least resulted in them going on a charge over the final 15 laps, but come the end they were only fighting over scraps.

As for Vettel, from the 40th pole of his career, the only pressure he encountered was at the start on the long run down to the Rettifilio from Webber and Ferrari's Felipe Massa. 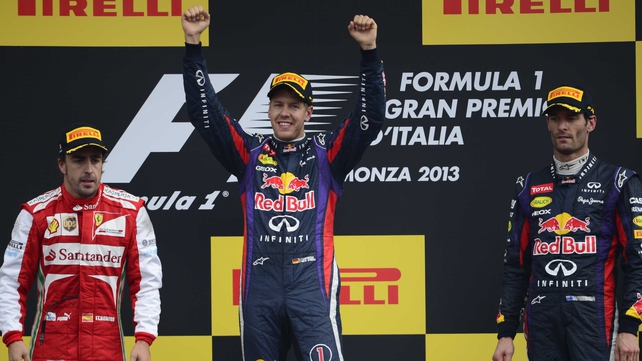 The 26-year-old made a rare mistake by locking up his front-right wheel under braking into the chicane, resulting in concern on the Red Bull pitwall for a while given the flat spot on the tyre.

In the end it proved to be a minor blemish on Vettel's latest win.

Although Alonso scythed his way up to second by passing Webber on lap three and team-mate Massa a few laps later, the closest the Spaniard came was around five seconds.

Behind the podium trio were Massa, Sauber's Nico Hulkenberg and Nico Rosberg in his Mercedes, followed by Toro Rosso's Daniel Ricciardo and Lotus' Grosjean, who just held off Hamilton on the final lap, with Jenson Button 10th in his McLaren.

As per usual at Monza, the podium ceremony conjured an astonishing sight as thousands of fans flocked on to the start-finish straight.

And unsurprisingly, Vettel was roundly booed when interviewed by the only man to win world titles on two and four wheels, John Surtees.

Despite the jeers, Vettel said: "It was a fantastic race.

"You can hear the difference when you don't win in a red suit, but it's very nice because it means you've done very good and beaten the red guys.

"You can see most people are dressed in red, are here for Ferrari, but there are a few blue caps as well, so they'll be happy.

"This is one of the toughest tracks we go to, but this year the car has been fantastic."

Alonso conceded he was "unable to close the gap" to Vettel, and come the finish ended up "fighting with Mark".

The Spaniard added: "We have this amazing podium ceremony, the most special of the year. Next year we will come back and hopefully we are in the top place.

"But a big thanks to the team for everything they do for me.

"Some people try to create tension between a team and driver, and here is the best example, but we always fight for the championship."

As for Webber, his message was short as he said: "It was a great team result - thank you to Monza, my last time here."