The capricious nature of the Ardennes made for an enthralling final ten minutes as at one stage it appeared as though Paul Di Resta would be on pole.

But as the rain eased in the dying stages over the Spa-Francorchamps circuit and a dry line appeared, Di Resta dropped to fifth in his Force India.

In the final 30 seconds Mercedes' Nico Rosberg, then Red Bull's Mark Webber and team-mate Sebastian Vettel were all on pole, only to be deposed by last man over the line Hamilton in his Mercedes.

For the fourth successive race Hamilton will lead away the field, the first time since Damon Hill in 1995 a Briton has achieved such a feat.

It is also the 31st pole of his F1 career, elevating him to seventh on the all-time list, just one behind another world champion Briton in Nigel Mansell.

Hamilton will have the Red Bulls behind him in Vettel and Webber, followed by Rosberg and Di Resta as Force India at least played a blinder for the Scot in the closing session.

The last ten minutes started with rain falling, and with nine drivers venturing out on slicks in a bid to beat the weather, only for it to become apparent they would have to switch to the intermediate wet tyres.

Di Resta, however, was the only one who started off on the inters, and for the majority of the session he was on provisional pole.

But the rain did not last long enough for Di Resta who looked on from his car as he tumbled to fifth, albeit still his best qualifying run, just four weeks after his worst in Hungary.

McLaren's Jenson Button joins Di Resta on row three, followed by the Lotus' of Romain Grosjean and Kimi Raikkonen, whilst the Ferraris of Fernando Alonso and Felipe Massa start ninth and 10th.

The start of Q1 was when the conditions were at their worst, but as the rain eased and eventually stopped, the track became quicker.

The call from most of the teams was to run the intermediate tyres - more adept at coping with the wet - throughout the 20 minutes.

At the death, though, Marussia and Caterham gambled by switching to dry rubber, resulting in a shock as Jules Bianchi, Max Chilton and Giedo Van der Garde made it through into Q2, the latter even setting the third quickest time in Q1.

Out in Q1 were both Williams, with Pastor Maldonado and Valtteri Bottas 17th and 20th, sandwiching Toro Rosso pair Jean-Eric Vergne and Daniel Ricciardo.

On the back row of the grid will be Sauber's Esteban Gutierrez and the second Caterham of Charles Pic.

Throughout Q2 the seven-kilometre circuit dried further, resulting in a host of names setting the fastest time, but it was where the luck ran out for the Marussias and Van der Garde.

For the 11th successive race Bianchi outqualfied Chilton, with the duo lining up 15th and 16th, without doubt their best positions of the same year, simiarly with Van der Garde who will start 14th.

The trio of drivers ahead of them will be Sauber's Nico Hulkenberg, Adrian Sutil for Force India and McLaren's Sergio Perez who line up 11th, 12th and 13th respectively. 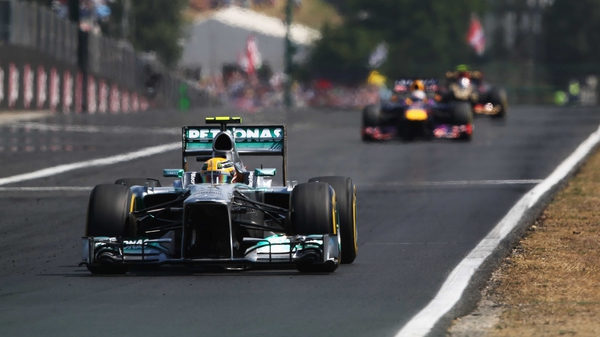