Sebastian Vettel today inflamed his feud with Red Bull team-mate Mark Webber by insisting he would likely disregard team orders again given a repeat of the Malaysian Grand Prix controversy.

Vettel invoked anger from Webber after the race two and a half weeks ago by blatantly ignoring a command from Red Bull team boss Christian Horner not to pass the Australian and hold for a one-two finish.

But acting of his own volition, Vettel went gunning for Webber after the final round of pit stops, going wheel to wheel before claiming a hotly contested 27th victory of his Formula One career.

Facing the media for the first time since apologising for his actions at the Sepang International Circuit, triple world champion Vettel was given a 20-minute grilling, during which he showed no remorse.

Pointedly asked if he would act differently if the circumstances were repeated, Vettel replied: "In the moment it might be different, but I would probably do the same.

"The bottom line is I was racing, I was faster, I passed him, I won" - Sebastian Vettel

"Had I understood the message and had I thought about it, reflected on it, thought what the team wanted to do, to leave Mark in first place and me finishing second, I think I would have thought about it and I would probably have done the same thing."

Vettel also showed scant regard for Webber, suggesting his actions in Malaysia were as a result of Webber's lack of assistance in the past.

The duo have had previous run-ins - colliding in Turkey in 2010 which forced Vettel out, almost coming together at Silverstone in 2011, and then last year in Brazil with Webber refusing to assist the German as he chased his third successive title.

"Being completely honest, I've never had support from his side," Vettel added.

"I've had a lot of support from the team, and the team support the both us the same way.

"But in terms of my relationship with Mark, I respect him a lot as a racing driver, but there has been more than one occasion in the past when he could have helped the team, but he didn't."

Suggested to Vettel what he did to Webber at Sepang was payback, he replied: "You could say indirectly so."

Although Horner's order was applied so his drivers could save tyres given the team's concerns over the Pirelli rubber, Vettel believes he deserved to win anyway.

In another withering comment against Webber, Vettel said: "I was faster in the end. That is why I was able to overtake, and overtaking in F1 is not easy, let's not forget that.

"Obviously I realised at that moment there was quite a conflict. On the one hand I am the kind of guy who respects team decisions and on the other hand, probably Mark is not the one who deserved it (to win) at the time.

"The bottom line is I was racing, I was faster, I passed him, I won." 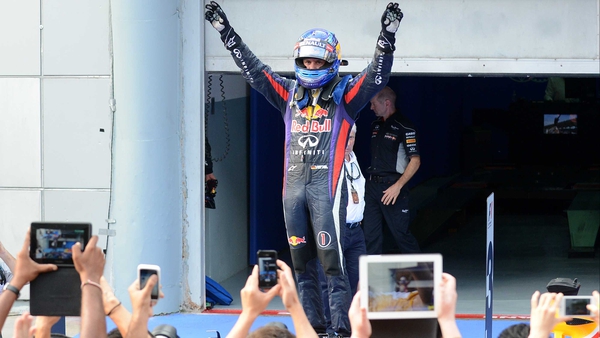 Debate over team orders in F1 brought into spotlight