Sebastian Vettel shone in Formula One's night race for the second successive season, but for Lewis Hamilton the lights may have gone out on his championship chances.

Vettel capitalised on Hamilton's retirement with a gearbox problem on lap 23 when comfortably leading the Singapore Grand Prix to take the chequered flag.

As team principal Christian Horner pointed out to Vettel after crossing the line: "Well done, you're back in the championship again."

The 24-year-old now trails Ferrari's Fernando Alonso by 29 points, the Spaniard claiming the 81st podium of his career - only Michael Schumacher and Alain Prost have more - by finishing third behind McLaren's Jenson Button.

Just when Hamilton garners belief he has a chance of the title, he finds his hopes cruelly snatched away.

In Germany, Hamilton retired 11 laps from home with puncture damage, albeit after an unhappy start when he was forced into an early pit stop after running over debris from a lap-one incident.

A superb victory in Hungary followed before the summer break, after which his Belgian Grand Prix ended at the first corner as he was one of four cars involved in a major pile-up.

The 27-year-old bounced back a fortnight ago with his win in Italy, and back-to-back triumphs appeared on the cards when he grabbed his 24th career pole yesterday.

The threat at the start for Hamilton was from Williams' Pastor Maldonado alongside him on the front row of the grid given the Venezuelan's penchant for poor judgment and errors this season which has resulted in many penalties.

But when the five red lights disappeared Hamilton's getaway was as sweet as he could have dreamed of, instead leaving Maldonado to deal with Vettel and Button.

From the perspective of both men they quickly managed to blast their way past Maldonado through the opening corners, dropping the 27-year-old to fourth ahead of Alonso who was unable to follow suit.

Leading comfortably from Vettel, however, Hamilton's gearbox gave way on lap 23, the Briton grinding to a halt down an escape road.

There was a clear shake of the head from Hamilton and a moment when he put his head in his hands.

That promoted Vettel into the lead ahead of Button and Maldonado, but the latter was also forced into retirement during the first of the two safety car sessions that followed in quick succession.

Narain Karthikeyan sparked the opener, maintaining Singapore's 100% record for safety cars over its five-year run, sliding his HRT into a wall on entry into Anderson Bridge from which there was no recovery.

The safety car pitted after running for five laps, but not for a moment of drama as Button nearly ran into the back of Vettel at one point shortly before the restart.

However, it was not long before safety car driver Bernd Maylander was back on track as for the second successive year at this track, Schumacher ran into the back of a rival.

On this occasion the seven-time champion was late on to the brakes of his Mercedes, hurtling into the rear of Jean-Eric Vergne's Toro Rosso.

After clambering from their cars Schumacher and Vergne embraced one another rather than engaging in any finger pointing.

Although both cars had slid down an escape road, there was enough debris on track to force the safety car quickly back into play.

But once it disappeared, for the leaders the rest of the race was fairly routine, with Vettel finishing 8.9secs clear of Button, with Alonso grinding out another podium.

Behind the trio, Force India's Paul Di Resta grabbed a career-high fourth, followed by Mercedes' Nico Rosberg and Kimi Raikkonen in his Lotus, the Finn now 45 points adrift in the title race.

Team-mate Romain Grosjean was seventh, followed by Ferrari's Felipe Massa, Daniel Ricciardo in his Toro Rosso and Red Bull's Mark Webber, surely out of the title running now as he is 61 points down.

Following his 23rd career win, an ecstatic Vettel said: "This is one of the toughest races all year, two hours, the circuit is a killer and the race seems to go on forever.

"Obviously we benefited from Lewis' retirement, the pace was there, so I'm incredibly happy and proud.

"I'd like to dedicate it to a very special man, Sid Watkins (former race doctor and FIA medical delegate who recently passed away), a big thank you to him."

Button said: "That was a pretty tough two hours for us. It's a good second place. We all want to win, but you can't win them all.

"For us as a team another failure is not great for us."

Alonso, who continues to hang on to the lead as his rivals trip over themselves, said: "This is one of the best tracks to drive, it was a fun race again." 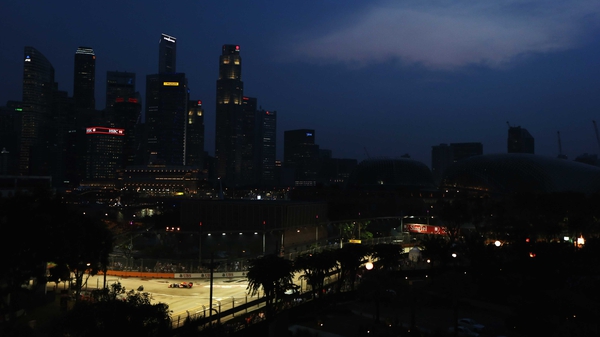