Mark Webber celebrated the eighth win of his Formula One career as history was made in today's Monaco Grand Prix.

For the second time in three years Webber triumphed around the streets of the principality, leading home a train at the end of the 78 laps as the top six were covered by just a few seconds.

Significantly, and for the first time in F1's 62 years, the season has now witnessed six different winners in the opening six races.

Alonso now leads the championship standings by three points to Vettel and Webber, with Hamilton 13 points down in fourth, and Rosberg 17 points adrift in fifth.

However, there may yet be a protest against the Red Bull by one of the other teams as the car is understood to be sporting an illegal floor.

It was not one of the most exciting races in Monaco's history, despite the closeness of the leading sextet, although it at least began with a bang.

Within seconds of Romain Grosjean's race was run, the Frenchman in his Lotus initially clipping Alonso, forcing him across to the left and into Michael Schumacher in his Mercedes.

The seven-time champion, who had set the fastest qualifying time only to incur a five-place grid penalty for running into the back of Williams' Bruno Senna in Spain a fortnight ago to drop to sixth, was squeezed against the barrier.

The contact between the two broke the left-rear suspension of Grosjean's car, forcing him into a spin and oncoming traffic at the first corner, Ste Devote.

Neither Sauber's Kamui Kobayashi, nor Williams' Pastor Maldonado, winner in Barcelona a fortnight ago, were unable to take avoiding action.

Maldonado hit the back of HRT's Pedro de la Rosa and ultimately came to a halt later in the lap, bringing out the safety car as he parked his Williams into a barrier.

Vettel was beneficiary of Grosjean's accident, the 24-year-old forced to cut the first corner, allowing him to move up to sixth after starting ninth.

Unlike the eight drivers who had started ahead of him on supersoft tyres, Vettel began the race on the soft rubber, allowing him to run for longer.

A number of teams suggested rain was on its way at one stage, which would have thrown a spanner in the works, but it never materialised until a few light spots in the closing stages.

Instead, it came down to a one-stop strategy, with the Pirelli tyres able to last around Monaco - as opposed to previous races this season - given the slower speeds and lighter loads.

Rosberg was the first of the leaders to make the move on to the soft tyres, followed by Webber and Hamilton two laps later.

At that stage Alonso was on the Briton's tail, and he duly put in a rapid lap before pitting himself, with his Ferrari crew turning him around 0.6secs slower than their McLaren counterparts.

It was enough to see Alonso leapfrog Hamilton, whose stop proved costly again further down the line when Vettel finally made his move to the soft tyres after 46 laps.

Again, the Red Bull pit team were faster than those at McLaren, and although Webber, Rosberg and Alonso were able to make their way past, Hamilton was forced to file in behind the German going up the hill, relegating him to fifth.

In dry conditions, and given Monaco's propensity for a lack of overtaking, that was the way it stayed until the close, with Webber bunching up the field, but knowing he could not be passed.

As for Jenson Button, winner here in 2009, the 32-year-old was a victim of Grosjean's accident as he was forced to go the long way round to avoid the debris.

Starting 12th, he dropped to 14th, ultimately retiring eight laps from the finish after running into the back of Caterham's Heikki Kovalainen at the swimming pool complex, leaving him 31 points down.

Force India's Paul di Resta again had his team to thank for executing another fine strategy as the Scot came home seventh ahead of team-mate Nico Hulkenberg.

With the rain finally arriving 15 minutes after the finish, there was obvious delight and relief from Webber.

"I feel incredible," said Webber. "It was a very interesting race, reasonably straightforward at the start, just managing the gap to Nico.

"But then the weather was threatening at the first pit-stop window, but Nico went for it, and people had to react.

"The second half of the race was very strange because it was very hard to get the soft tyre warmed up.

"I had very low front grip, I had to manage things around that, and I had to make sure Seb didn't get a gap of 21 seconds. That was not part of the plan.

"So I'm really glad to have won here again, a great victory for me."
Rosberg was equally as happy with his second place as he said:

"After the start it was about tyre management.

"I was surprised how strong we were, not only in qualifying but also the race.

"It didn't quite come together perfectly, but I'm very happy with second. I'm very pleased."

New championship leader Alonso said: "Our strategy was to finish in front of Sebastian and Lewis, and we did that.

"If you go race by race then the next one to look at will be Mark, but with every race there is the prospect of constant surprises.

"But here I felt good, I felt competitive, and I'm happy with that." 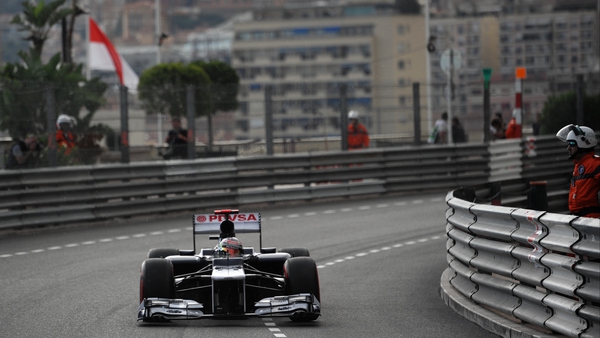