Ferrari have been fined $100,000 following the German Grand Prix for a breach of the FIA sporting regulations and the International Sporting Code, relating to Fernando Alonso's pass on team-mate Felipe Massa.

Ferrari may yet face further sanctions after being punished for implementing team orders during today's German Grand Prix.

The team were fined $100,000, a drop in the ocean to a marque of Ferrari's wealth, however it may not be the end of the story.

The matter has been referred to the World Motor Sport Council for further consideration, and they have unlimited powers at their disposal.

Ferrari team principal Stefano Domenicali and drivers Felipe Massa and Fernando Alonso all pleaded their innocence and claimed that team orders did not come into play.

But it cut no ice with anyone in the paddock at Hockenheim, and most importantly of all the stewards clearly did not believe their story.

The team were found to be in breach of article 39.1 of the FIA 2010 sporting regulations that states 'team orders which interfere with a race result are prohibited'.

With a touch of irony, that rule came into force following the 2002 Austrian Grand Prix.
That was when then team boss and current FIA president Jean Todt told Rubens Barrichello to allow Michael Schumacher by so the German could claim the victory.

Relating to today's incident, Ferrari were also charged with a breach of article 151c of the FIA International Sporting Code.

Domenicali has since confirmed ‘in the interests of the sport’ they will not be appealing the stewards' decision.

Domenicali further expressed his confidence ‘that the World Council will know how to evaluate the overall facts correctly’.

The facts, however, are quite simple: that after leading for all but a handful of the first 48 laps of the 67-lap race, Massa was given a coded message.

It came from his race engineer Rob Smedley who said: ‘Okay, so, Fernando is faster than you.’

Ordinarily, with a win in sight, a driver's natural reaction would be to increase his speed in order to preserve the victory.

Instead, emerging out of the hairpin on lap 49 Massa opted to slow, which in itself was an unusual place to do so, and that was enough to allow Alonso by.

As the earlier instruction would naturally have been made by team principal Domenicali, Smedley's apology was seemingly a further indicator something untoward had occurred.

After Alonso claimed the 23rd win of his career, another message from Smedley to Massa was aired as he thanked the 29-year-old for being ‘magnanimous’.

Massa, who shrugged aside Alonso's attempt at an embrace after they emerged from their cars in parc ferme, later claimed the decision to allow Alonso to pass was his own.
But no-one believed him or Ferrari, with Red Bull Racing team boss Christian Horner claiming it was ‘the clearest team order I've ever seen’.

Former driver and now BBC analyst Anthony Davidson remarked: ‘That was as blatant as it comes.

‘He (Massa) might as well have put his arm out of the cockpit and waved him (Alonso) through.’

Former team boss and BBC pundit Eddie Jordan typically pulled no punches as he said: ‘It was unlawful and was theft.

‘They stole from us the chance of having a wheel-to-wheel contest between the drivers. Ferrari should be ashamed.

‘This was a team order. For me it is cheating and these two cars should be excluded.’

In a heated, caustic post-race press conference a sour-faced Alonso and a visibly unhappy Massa were practically interrogated by the media.

The most pointed question to Alonso saw him asked if the victory ‘was up there with Singapore 2008?’

That was a reference to the 'crash-gate' saga when Alonso won that race whilst with Renault after then team-mate Nelson Piquet Junior deliberately crashed his car to assist in the triumph.

A stern Alonso replied: ‘This was a very strong result from Ferrari today, a strong performance all weekend.

‘If your final thought of the weekend is this, maybe you didn't see the whole practice, qualifying and the race.

‘Maybe it's a worry for you that I came back strong.’

Alonso's words, however, could not hide the fact they and the team had effectively brought the sport into disrepute, with fans on the message boards furious at what they had witnessed.

As far as the championship is concerned, Alonso is now 34 points adrift of McLaren's Lewis Hamilton who was forced to settle for fourth behind home hero Sebastian Vettel and ahead of team-mate Jenson Button.

Despite that Hamilton has managed to increase his lead to 14 points to Button and 21 to Mark Webber, who came home sixth, and Vettel. 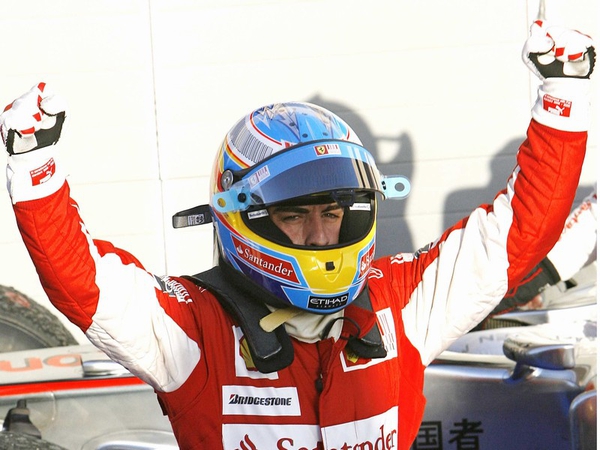 Ferrari back on top in Germany