Fernando Alonso has conceded he needs 'the perfect season' if he is to again win the Formula One world title with Renault.

Alonso yesterday, as expected, rejoined the French marque on a two-year contract, with the option of extending the deal into a third season.

The move finally ended speculation surrounding the future of the 26-year-old after his recent split from McLaren in the wake of a turbulent year with the team.

But whether Renault can provide Alonso with a winning car, as he enjoyed in 2005 and 2006 when he won his championships, remains to be seen.

With Giancarlo Fisichella and Heikki Kovalainen at the wheel last season - both of whom have been ditched by team principal Flavio Briatore - Renault could only finish a disappointing fourth in the constructors' title race.

Alonso should give Renault an edge they lacked, so it will come down to the car beneath him to decide whether he will challenge the Ferraris and McLarens.

'Maybe Renault can be part of the top teams again next season,' assessed Alonso after signing a deal that reportedly makes him the highest-paid driver on the grid.

'The challenge is for them to go back to the top of the [time] sheet in January or February, and then get closer to the podiums next season. They have suffered more than enough this year.

'But, as for the title, we will see what can be done. We shouldn't put the cart before the horse.

'The first thing to do is to put the car on track in January and then start working thoroughly in order to get to the first grand prix of the season with the best car possible.

'I had to rise to the same challenge last year during the winter season, and I am confident that this can happen again. After that, I will have to have a perfect season and hope for the others not to be too quick.'

Alonso concedes his decision on where to drive next year was not an easy one to make given the interest in his services.

It was helped by the fact Renault avoided punishment for their role in the spy saga, despite the fact they were found guilty on Friday of fraudulent conduct.

Although refusing to divulge the number of options open to him, he added: 'I'm one of the 22 privileged people who drives a Formula One car each year.

'I'm even more privileged to be one of those who can afford to leave one great team and end up in another great team. While there are a lot of drivers who never get the chance to drive a Formula One car, so the decision wasn't an easy one to make.

'But I would like to thank all the other teams for their interest to have me work with them. In the end, I chose Renault considering their commitment to the sport and because of their strong track record.' 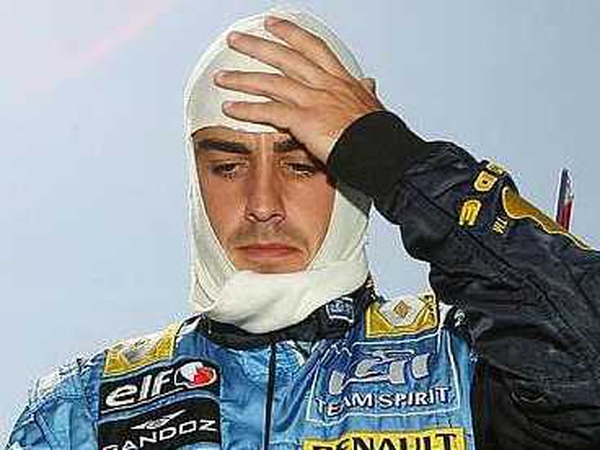