Valentino Rossi claimed pole position as he began his bid to wrap up a sixth world title at the season-ending MotoGP in Valencia.

The Italian's only rival for the crown, American Nicky Hayden, had to settle for a place on the second row after only clocking the fifth-fastest lap time in qualifying.

Rossi heads the standings by eight points from Hayden, whose crash at Estoril last time out has left him needing to finish ahead of the champion to stand any chance of deposing him.

Rossi - who set a Valencia lap record in securing his fifth pole of the season - had not led the championship at any stage until after Hayden had inadvertently been taken out by Honda team-mate Dani Pedrosa in Portugal.

The incident has set up a dramatic season finale, which will be the last MotoGP race at 990cc before switching to 800cc next year.

Yamaha rider Rossi said: ‘Sunday is the most important race of the year.’

‘I will be fully concentrated from the first to the last minute. The bike is going very well and I feel comfortable.’

Pedrosa came in sixth with Australian Casey Stoner, who went to hospital in the morning after complaining of a back problem, was seventh ahead of Chris Vermeulen, John Hopkins and Colin Edwards.

Spain's Jorge Lorenzo, the leader in the 250cc championship, qualified second for tomorrow's race behind Hiroshi Aoyama of Japan. His chief rival for the title, Andrea Dovizioso, could manage only seventh. 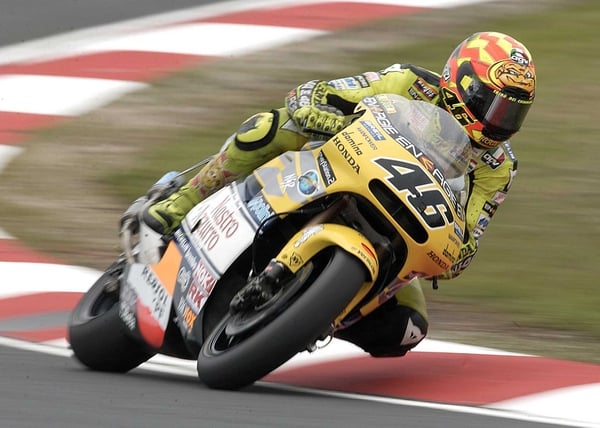 Rossi powers to victory in Germany