Conor McGregor's hopes of luring Khabib Nurmagomedov into a rematch are in tatters after he was stopped by Dustin Poirier in a seismic upset at UFC 257 at Fight Island in Abu Dhabi.

McGregor had beaten Poirier inside two minutes in September 2014 and was overwhelming favourite to see off his American rival again in a bid to get fierce adversary Nurmagomedov to reverse his retirement decision.

But Poirier managed to gain revenge, surviving one or two nervy moments in the first round and then gaining the upper hand in the second round with some savage kicks to McGregor's lead leg.

Poirier forced McGregor back with a flurry of punches, flooring him with a short right hook before a couple of blows to the defenceless McGregor led to the end of the fight after two minutes and 32 seconds of the second round.

This was McGregor's first fight in a year when he stopped Donald Cerrone in 40 seconds. Before that he had not stepped inside the octagon since October 2018. 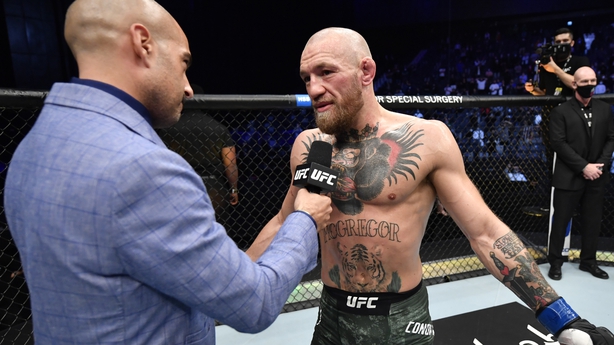 The Dubliner admitted his long stretches on the sidelines had come back to haunt him.

"If you put in the time in here, you're going to get cosy in here and I just have to dust it off and come back and that's what I will do. I need activity, you don't get away with being inactive in this business," McGregor said.

Poirier said in the octagon afterwards: "I'm happy but I'm not surprised, I put in the work. Conor took this result very professionally and nothing but respect. We're 1-1, maybe we have to do it again.

"The goal was to be technical, pick my shots, not brawl at all. I felt like I was boxing pretty well with Conor, he hit with some good counters.

"I felt like this was a title fight. If Khabib's not coming back then me and Conor are the two best guys. I'm the champion."