Conor McGregor paid tribute to the Nevada State Athletic Commission for their fair handling of the brawl which overshadowed his fight against Khabib Nurmagomedov.

McGregor was banned for six months and fined $50,000 (€38,000) following an investigation into the unsavoury incidents last October.

McGregor tweeted: "I am thankful for the Nevada Athletic Commission's fair assessment and handling of the brawl incident."

Nurmagomedov retained his UFC lightweight title when he submitted McGregor in the fourth round.

The Russian threw his gumshield towards McGregor's corner and scaled the octagon before attempting to attack someone from the Irishman's team in the crowd.

McGregor was also involved in a confrontation after members of Nurmagomedov's team entered the cage.

"It was not my intention to land the final blow of the night on my opponent's blood relative," McGregor continued. "It's just how it played out. I look forward to competing again soon."

However, Nurmagomedov's agent has said his client will never fight in Vegas again, due to the punishments meted out to his team-mates for their part in the brawl.

"He's done with Vegas for giving his brothers such harsh punishment," Ali Abdelaziz told ESPN. "He loves MSG [Madison Square Garden]. Lots of his fans live around there, and New York has always been good to him. He misses fighting in New York."

Zubaira Tukhugov and Abubakar Nurmagomedov were both banned for 12 months and fined $25,000 for their part in the brawl.

Posting a picture from the brawl, McGregor added: "Straight left hand inside the attacker's jab.

"He attempted to use the big security guard that's in all the movies as cover, but I could smell him a mile away and landed flush down the pipe.

"The final blow of the night UFC 229 in association with McGregor Sports and Entertainment."

Both suspensions have been backdated to the event in Las Vegas on 6 October . 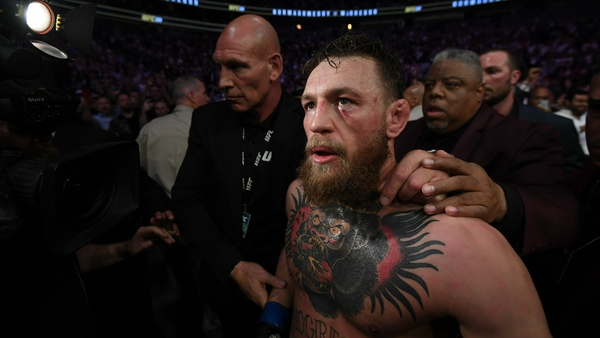