Conor McGregor's return to the UFC fell flat as he submitted to Khabib Nurmagomedov in the fourth round but the Russian's victory was soured by an unseemly post-fight melee instigated by him.

Nurmagomedov delivered a career-best performance and was comfortably ahead on all the scorecards when he mounted McGregor and locked a rear-naked choke, forcing the Irishman to submit three minutes and four seconds into the penultimate round.

Nurmagomedov therefore retained his lightweight title but then threw his gumshield, mounted the cage and appeared to attack Dillon Danis, a training partner of McGregor.

A prone McGregor was then seemingly attacked by members of Nurmagomedov's camp as the bad blood that had been building up ahead of the fight came to a head.

This ringside video is absolutely INSANE. Khabib came FLYING out of the octagon on a goddamn mission. #UFC229 pic.twitter.com/Xx5FwCfc07

According to UFC president Dana White, three men were arrested after the attack on McGregor, who he said was unharmed and "upset about the fight, not the fight after the fight".

Nurmagomedov was showered with boos and warned by White to leave immediately, saying he would not be officially presented with the belt as "people might get hurt".

The Dagestani then exited the arena under police escort to a chorus of jeers and flying beer cups.

White added afterwards: "I don't know what to say, I'm just disgusted. I didn't see that one coming. We had so much security."

He questioned the repercussions for Nurmagomedov and his team-mates saying: "God knows what the Nevada State Athletic commission is going to do to these guys. Will they ever get a visa to come back into the country?" 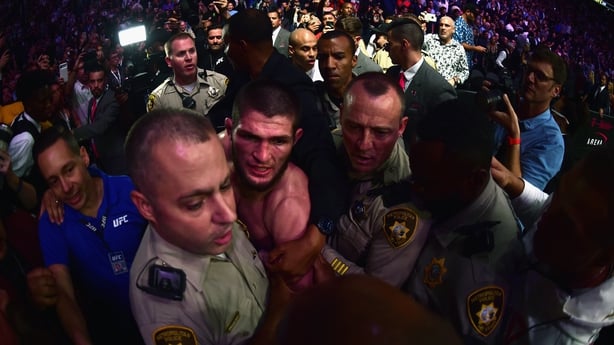 The events overshadowed the fight itself, which had been a triumph for Nurmagomedov.

McGregor, making a comeback to the octagon after nearly two years away, had looked dangerous in the early striking exchanges but, as expected, Nurmagomedov quickly took the fight to the ground.

The Russian smothered him with his wrestling skills and prevented him from getting back to his feet for the rest of the round.

The Dubliner was then wobbled by an early right cross from the Russian in the second round and the fight was soon on the floor again, but this time the champion was able to keep the challenger from getting his back to the cage.

McGregor survived until the end of the round, giving a tired smile as the horn went, and in the third period he managed to keep the fight standing, tripping off shots to the head and body as he rediscovered his range.

However, it proved to be too little, too late, and the Nurmagomedov was once again on top in the fourth, sapping McGregor's energy with his excruciating pressure before the choke hold ended the fight.

The victory stretched his professional record to 27-0 and handed the Irishman his second defeat in the UFC.

Tony Ferguson had earlier called out McGregor after a thrilling victory over Anthony Pettis in the co-feature.

Ferguson, fighting for the first time since a serious knee injury deprived him of the chance to fight for the lightweight title earlier this year, was knocked down by Pettis in the second round.

But after 10 minutes of pulsating action, a bloodied Pettis was withdrawn from the fight by his corner after sustaining a suspected broken hand.

Ferguson, speaking before McGregor's UFC return said: "I want McGregor, if Khabib doesn't finish him tonight, then I'm going to be the one who does it.

"I'm happy to be back. Thank you to the fans for being amazing tonight! I had fun in there! I wasn't going to let anyone take this moment away from me."

Ferguson later added that Nurmagomedov's post-fight actions were "unprofessional, at a time we're trying to clean up the sport". 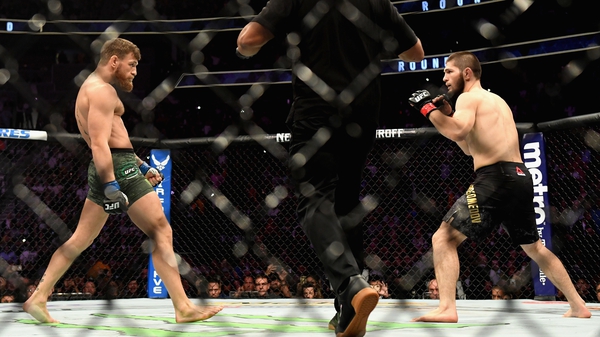 McGregor seeking a rematch with Khabib