UFC president Dana White says there is the real possibility that Conor McGregor will be stripped of his lightweight title unless he makes a return to the octagon soon.

The 29-year-old’s most recent fight was the money-spinning boxing defeat to Floyd Mayweather last year, but it is 13 months since the Dubliner became a two-weight world champion with victory over Eddie Alvarez.

A return has been mooted for later in the summer or early Autumn, but White told FOX Sports that such an absence would not be tolerated by the governing body.

"If (McGregor) comes back in September, that’s almost two years [since he won the title]," White told the FS1 post-fight show.

"That can’t happen. It’s not fair to everybody else. Love Conor, respect Conor, love everything that he’s done for this company. Everybody knows that. I say it all the time. (But) the belt would have to move on.

"I want Conor to start training again and come back and defend his title. We haven’t committed to a time yet, but as long as Conor wants to fight still, Conor and I always get it done," he added. "You know how Conor is.

With the 155lbs division waiting on McGregor’s next move, White is considering offering Khabib Nurmagomedov and interim champion Tony Ferguson the chance to battle it out for the belt.

"You do Khabib [Nurmagomedov] versus Tony Ferguson; we’re working on that fight now. If and when Conor comes back, he would get the first crack at the title."

When asked for a definitive statement on McGregor, White said he could "absolutely" be stripped of the belt. 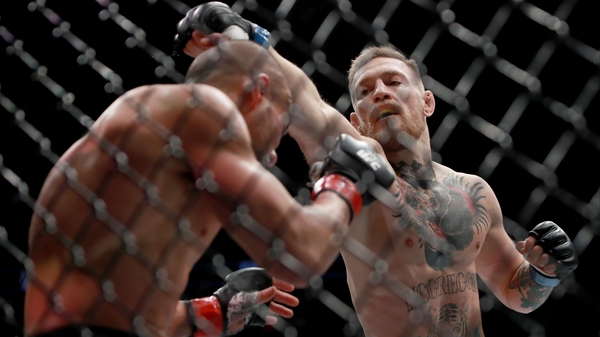