Conor McGregor and Nate Diaz weighed in at the MGM Grand as things finally heated up in the desert ahead of the pair's rematch at UFC 202 on Saturday night.

A build-up that, bar a farcical press conference skirmish, had struggled to reach the fever pitch of the Notorious's previous fights in Sin City over the past year, sparked with the belated arrival of hundreds of Irish fans to create a raucous atmosphere in the casino's cavernous convention centre on Friday afternoon.

McGregor and Diaz had both comfortably made the weight for the welterweight rematch at the T-Mobile Arena and as the crowd hit fever pitch, McGregor promised to right the UFC record that suffered its first loss when Diaz submitted him in March.

"He should have killed me when you had the chance. Now I'm back and I'm going to kill you and all your f***ing team...you and them b*tch kids," McGregor roared before storming off the stage.

Diaz responded: "I train always hard to kill. He's already dead from the last time. This is a new fight so it's kill or be killed again. Team USA motherf***ers."

This fight week has been marked by a major drop-off in the Irish contingent who have invaded the desert for McGregor's three previous fights here since July last year.

However a late influx swelled significantly with hundreds of J1 students making their way from west coast cities.

Things threatened to get heated at times with large numbers of supporters from Diaz's native north California flooding the MGM Grand too, security warily watching the scene after chaotic fracas at Wednesday's press conference.

Both fighters had actually weighed in much earlier on Friday in keeping with the new athlete-friendly regulations adopted by the UFC and Nevada State Athletic Commission.

Diaz was one of the first fighters on the card to step on the scales, coming in at 170.5lbs, safely within the margin. 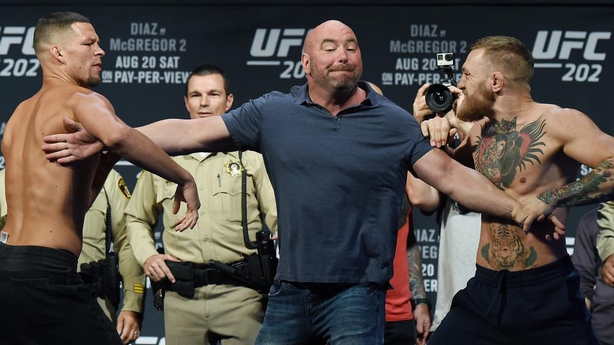 McGregor cut things a little finer in terms of time but tipped the scales at 168lbs, ensuring as well as height and reach advantage, Diaz will again be the heavier man on fight night.

The late influx of Irish fans aside, there are still many unsold tickets for Saturday fight night, McGregor's first at the new T-Mobile Arena in the city.

According to one report on Friday, the UFC had slashed ticket prices by as much 40% in some sections of the stadium. However they insisted the rematch is still on course to be one of the biggest cards ever.

"It will be one of the top five gates in UFC history," the UFC's Dave Sholler confirmed. "We've always used dynamic pricing."

Meanwhile the UFC confirmed they will be returning to Ireland later this year for a Fight Night card in Belfast on Saturday 19 November.

It will be the organisation's only Irish event in 2016, their second Belfast card will act as a double-header with a Fight Night in Brazil that will follow it on the same night.