Conor McGregor has shown off some of the moves he believes will punish Nate Diaz's "repetitive" tactics as the final verbal volleys were thrown ahead of UFC 196.

The Dubliner takes on Diaz in Las Vegas on Saturday night in a hastily arranged bout that followed the withdrawal of Brazil's Rafael Dos Anjos due to a foot injury.

Things came to the boil in Las Vegas on Thursday afternoon as the two men were involved in an onstage scuffle at the MGM Grand.

It followed two weeks of trash talking and taunts, with Diaz's allegation that McGregor has taken steroids among a slew of barbs.

McGregor, as ever, remains supremely confident of finding a way to dismiss the 30-year-old, using an appearance on Conan O'Brien's talk show to offer a glimpse of the moves he'll pull out when the action finally starts.

“I feel he’s repetitive. His foot patterns... he’s almost stuck in a routine. His shots are the same, over and over, his retreat is the same over and over," said McGregor.

"I feel there are many shots in my book that will land. I like the left upper cut. Although he has the height and the range I still like that rear upper cut and then I also like the Meia Lua, it’s a Capoeira technique where you spin, put your hand on the mat and swing your heel around like a baseball bat.

"It’s a technique I’ve become very good at and am getting better at so I think I might break it out and ping it across his head." 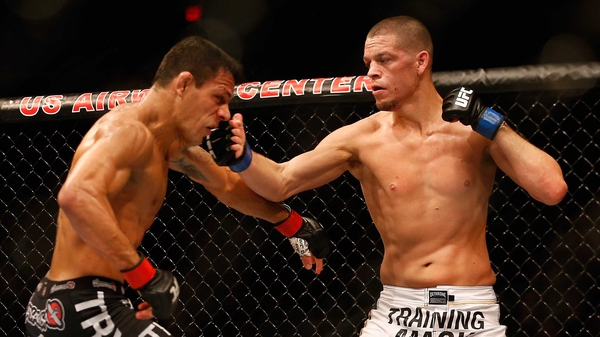