It wasn't quite the cakewalk many had predicted but even without injured All-Star Adrian Mullen, Ballyhale Shamrocks were still good value for their ninth AIB All-Ireland club SHC title success.

The seven-point win may have flattered Pat Hoban's side slightly as they led by just one with eight minutes of normal time remaining but, in truth, they rarely looked like losing with Eoin Cody their key man in attack.

The Kilkenny star helped himself to 1-05 across the hour, all from open play, and signalled once more that he can develop into one of the best forwards in the game in the coming years.

TJ Reid scored just the one point from play though his six other points from placed balls were significant in a relatively low scoring contest.

Dunloy, who have now slipped to their fifth All-Ireland final defeat, placing them alongside Rathnure of Wexford as the team with the worst final record, will reflect on the five-minute period from the 52nd minute as decisive.

They had reduced the gap to just a point at that stage but four Ballyhale points in a row from Cody, Paddy Mullen, Killian Corcoran and Colin Fennelly put clear daylight between them again and left the strong favourites in the clear.

Having slipped up in their bid for a three-in-a-row of All-Ireland titles last year, famously succumbing to Harry Ruddle's late, late goal for Ballygunner, it will go down as one of the sweetest wins for the Kilkenny representatives.

Dunloy, led in scoring terms by county marksman Conal Cunning, didn't lose any face in defeat either as they battled gamely throughout.

Their semi-final win over St Thomas', when they overwhelmed the former champions with their dynamism and race pace, hinted that further gains may lay ahead on their return to spacious Croke Park.

A couple of early scores for Dunloy provided further evidence for this theory; Ronan Molloy sniping a terrific solo goal after just three minutes and defender Oran Quinn then racing 40 metres through the centre for a 14th minute point.

Mullen's loss was considerable in the Ballyhale attack though they still lined out with iconic forwards like Reid and Fennelly and in an effort to curb their influence, Dunloy went with Kevin Molloy as an extra defender.

Cunning and Seann Elliott operated as a two-man inside forward line for Dunloy, clearing Richie Reid for a free role in the Ballyhale defence.

Eoin Cody was the difference initially, his 1-03 tally in the first-half sending the five-in-a-row Kilkenny champions in with a 1-09 to 1-07 half-time advantage.

Cody's 15th minute goal was a close range tap in though he almost converted two other beauties, his 11th and 26th minute snapshots stopped on both occasions by Dunloy and Antrim goalkeeper Ryan Elliott.

Every Dunloy score was greeted with a huge ovation and it was clear that the underdogs benefited from the large travelling support from Ulster. Football finalists Glen are located less than 20 miles from Dunloy across the Antrim/Derry border and also wear yellow and green.

Mullen was replaced by Niall Shortall and the rookie didn't score and was eventually replaced by Brian Cody in the second-half. Cody hadn't featured in recent games due to injury and wore number 31 on the day.

Mullen's scoring influence was missed though Ballyhale, crucially, maintained their lead throughout the second-half. TJ Reid converted three '65s in the third quarter and Eoin Kenneally got his name on the scoresheet too.

Keelan Molloy, who scored a cracking solo goal in the semi-final, came strongly into the contest for Dunloy, firstly scoring a point and then winning a free that Cunning converted.

Gregory O'Kane's side got the margin back to a point with 10 minutes to go at 1-13 to 1-14 but that's when the Shamrocks registered those crucial four points in a row, going a long way towards deciding the game.

Both Cody brothers, Eoin and Brian, got in on the scoring act even later on, while Darragh Corcoran punched the air in delight when he split the posts deep into stoppage time to secure yet another All-Ireland for a Kilkenny hurling team. 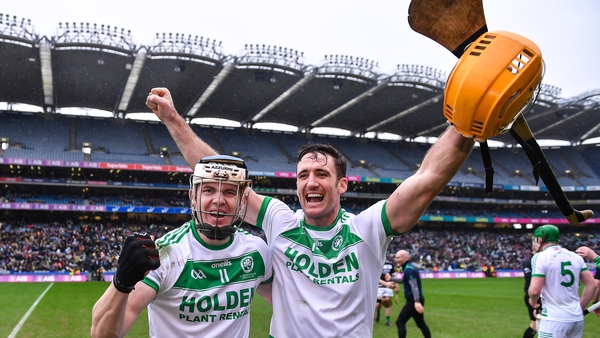