Two Walsh Cup games played, two wins in the bag and a Croke Park final to look forward to. These are early days yet in 2023 but the signs are positive for Henry Shefflin and Galway who were full value for this Parnell Park win.

With eight different scorers - Evan Niland helped himself to seven points, all from frees while newcomer Declan McLoughlin struck the late goal - and as many substitutes brought on, it was a worthwhile trip to the capital for the Tribesmen.

They will return to Dublin at the end of the month for the final even though they still have a Round 3 clash with Antrim to fulfil next weekend.

Galway can't be caught at the head of the table with their wins over Westmeath and now Dublin, meaning further experimentation is likely against the Saffrons.

Galway trailed by a point at half-time after a low key opening half but overwhelmed their opponents in the second-half, outscoring the Dubs by 1-15 to 0-08 in that period.

A burst of five points in a row between the 50th and 55th minutes put significant daylight between the teams for the first time and Galway were always comfortable from there on. 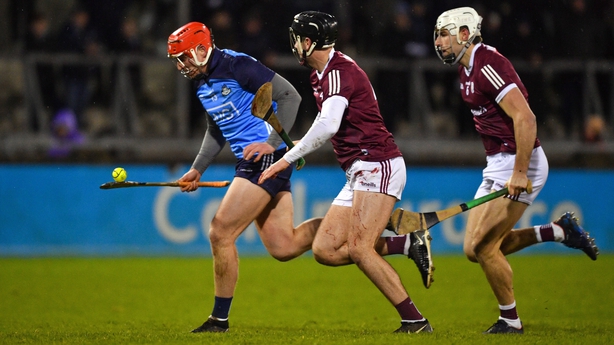 It was virtually an entirely new Dublin team from the side that lined out against Antrim in last weekend's 3-26 to 2-22 Round 1 win, also at Parnell Park.

Naomh Barrog's Joe Flanagan, who struck 0-14 in that game, was the only player retained with the likes of 2022 captain Eoghan O'Donnell, Andrew Dunphy beside him in the full-back line, Fergal Whitely and Conor Burke all making their seasonal debuts.

O'Donnell, who closed out the 2022 inter-county season as a Dublin footballer, was stationed at full-back throughout and marked a series of Galway players as the visiting forward line rotated positions throughout.

As for Galway, they went with all but four of the starting team from the Round 1 demolition of Westmeath; Jack Grealish, Tiernan Killeen, Jason Flynn and Brian Concannon coming into the team.

It was a largely experimental Galway team in general with Grealish, Flynn and Concannon the only starters from last July's All-Ireland semi-final defeat to Limerick retained in the starting lineup.

In cold conditions on a heavy pitch, it was a tough watch initially with the same amount of wides in the first-half, 13, as scores.

Cian O'Sullivan came on for the apparently injured Andrew Jamieson-Murphy and it was O'Sullivan's second point of the half deep into stoppage time that gave Dublin a 0-07 to 0-06 half-time lead.

Flanagan, fresh from a strong debut performance against Antrim, struck three of those Dublin points, all from placed balls.

Niland contributed four of Galway's six points in the opening half with all of those coming from placed balls.

The highlight of the half was arguably O'Donnell's huge hit on Flynn in the 25th minute. Concannon played in Flynn but the big forward's run towards goal was unceremoniously halted by a shuddering shoulder from O'Donnell. Dublin eventually won a free-out and a minor melee ensued though no cards were issued.

Dublin didn't exactly collapse in the second - they played at about the same level and actually yielded a point more than their first-half tally.

It was just that Galway upped the ante, reeling off bursts of three and then five points in a row to open up a 0-15 to 0-10 lead after 55 minutes.

Dublin lacked penetration up front and a killer final pass and their only second-half point from play came in the 76th minute from Conor Donoghue.

Galway, meanwhile, found scores easier to come by and Tom Monaghan impressed when he came on, scoring 0-02, while Ronan Murphy finished with 0-03.

Donal O'Shea moved onto the frees after Niland's 60th minute withdrawal and Portumna man McLoughlin snatched his goal in stoppage time after a searching ball in from Sean O'Hanlon squirmed into his path on the left.

In the competition's other game today, Westmeath recorded their first win of 2023 with a hard-fought two-point victory over Antrim at Abbottstown.

Level seven points apiece at the break, Westmeath finished strong in the final quarter to win on a 0-15 to 0-13 scoreline, Eoin Keyes contributing 0-04 to the victors' tally.