Amid scenes of raw emotion, unbridled joy, Shinrone won their first ever Offaly Senior Hurling Championshio with a huge win over favourites Kilcormac-Killoughey in O'Connor Park on Sunday afternoon.

It was an extraordinary win for Shinrone who were competing in only their second senior final – they had been beaten by a point by a then dominant Drumcullen in a controversial final in 1960, with the winning points coming deep into hotly contested injury time.

It was a dream come true for Shinrone, who have emerged as contenders in recent years but struggled to beat big teams. Their stars changed this year when they eliminated four in a row seeking St Rynagh's in the quarter-final and came back from the dead against Belmont in the semi-final.

They carried it a step further in a high scoring shoot out in Tullamore. It was an extraordinary game of hurling as Shinrone lived on their wits in the first twenty minutes and could have been dead and buried before the break. 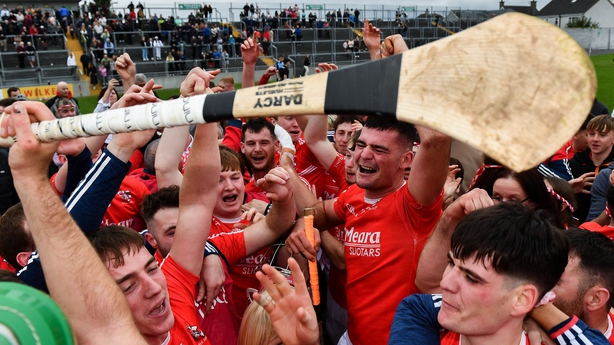 K-K had started brilliantly, registering three quick fire points and they could have built up an insurmountable lead by the 20th minute. Alex Kavanagh was wide with two very good goal chances and had another blocked down while other chances went abegging as K-K paid a very dear price for their wastefulness.

K-K were 0-05 to 0-02 up after fifteen minutes and could very easily have had 2-08 on the board at this stage. It is doubtful if Shinrone could have came back from that but instead, the entire complexion of the game had changed by half time.

Man of the match Ciaran Cleary (one of four clear brothers on the Shinrone team and a nephew of the Dooley's from Clareen, a first cousin of Killian and Jason Samspon and a related to several other Cleary's on the panel) was sensational in the first half, upsetting K-K with his ball winning physicality at full forward and scoring four super points as they led by 0-10 to 0-08 at half time.

The effect of that lead was powerful on both sides. K-K were now full of doubts, their confidence shattered to bits. Shinrone were the opposite, smelling glory and playing like men possessed. After Cathal Kiely got a K-K free at the start of the second half, Shinrone went on the rampage, scoring six without reply to lead by 0-16 to 0-09.

Victory was within touching distance and they were not to be denied. Brothers Killian and Jason Sampson turned it on spectacularly in the second half, scoring four points each – Killian's four point haul from wing back was a real game winner.

Shinrone were 0-20 to 0-12 ahead when Ger Healion scrambled home a 52nd minute goal. The winners responded superbly every time a question was asked, keeping the score board ticking over and they got the next two points.

It meant that Cillian Kiely's injury time goal was only of academic interest and they were never to be forgotten scenes of celebration as Jason Sampson became the first Shinrone man to lift the Sean Robbins Cup.