Two city rivals will collide in the Cork Premier Senior Hurling Championship, as Blackrock and St Finbarr's both navigated their respective semi-final challenges, the latter booking their spot in a first final in 29 years.

The Barr's, under the management of Ger Cunningham, and with no appearance in a county decider since their last title in 1993, made no mistake against noughties kingpins Newtownshandrum.

A whirlwind start set the Togher side on their way, Brian Hayes' goal taking their advantage into double digits by the 13th minute, at 1-09 to 0-01. While Newtownshandrum rallied impressively to narrow the deficit to five at the break, Ben Cunningham's goal early in the second half shut the door on any comeback, the Barr's cantering home to reach a long-awaited county final on a 2-25 to 0-20 scoreline.

There to meet them will be their great rivals from the southside of the city, Blackrock who overcame Erin's Own in the afternoon's first semi.

The Rockies, last champions in 2020, produced a powerful second half display to triumph against the east Cork outfit, Tadhg Deasy, Michael O'Halloran and Robbie Cotter firing the crucial goals in a 3-21 to 0-20 win.

In Clare, Shane O'Donnell ran riot as Éire Óg were much too strong for Inagh-Kilnamona in Cusack Park, the inter-county star rustling up 1-09 as the Ennis side sealed their semi-final berth with a 2-21 to 0-16 win. However, the game was marred by a nasty leg injury to Inagh-Kilnamona's Jason McCarthy, leading to a lengthy stoppage in which an ambulance arrived onto the field of play.

In the earlier game, Ballyea overcame Clooney-Quin, despite a 0-14 haul from Peter Duggan, with Clare's other marksman Tony Kelly coming good in the second half as the 2017 All-Ireland finalists reached the last-four on a 2-21 to 0-18 scoreline.

On Saturday evening, Sixmilebridge, seeking a fourth title in six years, made light work of Wolfe Tones in Ennis, winning by 13 points on a 3-22 to 0-18 scoreline. Ex-county star Jamie Shanahan racked up a hefty total of 0-13, while David Kennedy, Shane Golden and Seadhna Morey all fired goals as the championship favourites ran home handy winners.

In the preceding game, 2014 champions Cratloe nailed down their own spot in the semis, albeit only after withstanding a furious third quarter rally from Newmarket-on-Fergus. A nine-point advantage was reduced to two as the endgame approached, before goals from the excellent Rian Considine and Sean Gallagher settled the encounter, 2-23 to 2-16 the score in the finish.

Clonoulty-Rossmore's run in the Tipperary SFC came to an end as they fell to a five-point defeat to favourites Kiladangan in Thurles, Tadhg Gallagher scoring 1-03 as the favourites won 1-14 to 0-12.

Earlier, Upperchurch Drombane produced a stunning comeback to defeat JK Brackens, rattling off the final eight points of the game to win 2-21 to 1-21, Paudie Greene starring with a 1-13 haul.

In the semis, they're joined by Drom and Inch - who ended Loughmore-Castleiney's reign in the televised game on Saturday evening - and Kilruane McDonagh's, who edged out Toomevara by two points - 2-17 to 2-15 - in the remaining quarter.

In Kilkenny, the promised double header was cut in half by the postponement of Ballyhale Shamrocks and Clara, while in the game that did proceed, Dicksboro eased their way into the semis with a commanding victory over Mullinavat, Andy Gaffney racking up 1-13 in a 3-19 to 1-11 win.

In the last-four, they'll face city rivals, James Stephens, who overcame Bennettsbridge in their Saturday evening quarter-final. The Village fired home the final five points of the game to win a competitive encounter 1-20 to 1-15.

Earlier on, former aristocrats Tullaroan edged out Erin's Own of Castlecomer in the QF clash, finishing strongly to squeeze home on a 0-18 to 0-15 scoreline.

In the Dublin SHC quarter-finals, Na Fianna fired past St Vincent's on a 1-19 to 0-16 scoreline, while Ballyboden St Enda's replicated the success of their footballers with a 2-21 to 0-23 win over Lucan Sarsfields.

All-Ireland champions Kilcoo survived a mighty scare in the Down SFC quarter-final, being taken all the way to sudden death in a penalty shootout by Clonduff. In a characteristically cagey affair, the sides couldn't be separated over 90 minutes of football, 1-08 to 0-11 the scoreline by the end of extra-time.

Tied 3-3 after the first five spot kicks, Paul Devlin stepped up to slot his second penalty of the shootout, before Aidan Carr had his effort saved, ensuring Kilcoo's progression to the last-four.

In the Laois SFC, Scott Osbourne pulled off a spectacular save at the death as Portarlington edged out Portlaoise 0-09 to 0-08 to reach another decider.

Standing in the way of their three in a row bid are O'Dempsey's, who overcame Courtwood 1-16 to 0-11, Daithi Howlin 55th minute goal effectively sealing the win.

In the Donegal SFC, Naomh Conaill reached a sixth successive final, after eking out a 0-13 to 1-08 win over Gaoth Dobhair, surviving a late rally in the process. They await the winner of Kilcar-St Eunan's in the second semi-final next Saturday.

2021 finalists Gowna gave notice of their Cavan SFC championship credentials, comfortably dispatching Cavan Gaels in their quarter-final replay on Saturday evening. Conor Madden blasted home the opening goal after three minutes, as the seven-time champions - last triumphant in 2002 - established a 1-07 to 0-04 lead at half-time. There was little respite for the Gaels thereafter, Oisín Pierson's 51st minute strike effectively settling the encounter, as Gowna cantered home on a 2-14 to 0-09 scoreline.

In Longford SFC, Colmcille will have a shot at a first county title since 2008 after easily accounting for Longford Slashers in Sunday's semi-final, easing to a 1-13 to 0-05 win.

Reigning champions Mullinalaghta will be there to face them after overcoming Dromard on Saturday evening. David McGiveney's five-point haul was critical as the 2018 Leinster champions ground out a 0-15 to 1-09 win.

In Louth, Ardee St Mary's snatched a dramatic win in the 10th minute of injury time to end Naomh Martin's reign and set up a decider against Newtown Blues, who demolished Geraldine's with brutal relish in the other semi. 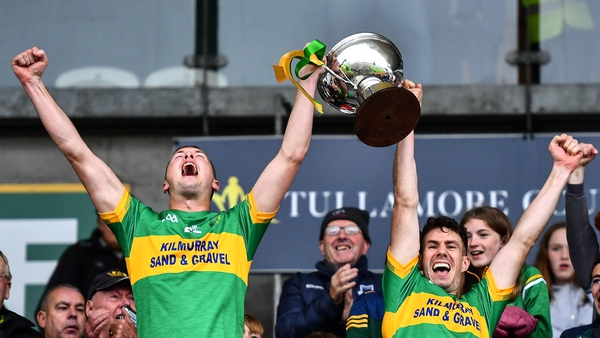