Former All-Ireland winning manager Micheál Donoghue has been appointed as the new Dublin senior hurling boss, the county have confirmed in a statement.

Donoghue, who famously guided his native Galway to a long-awaited All-Ireland title in 2017, has been handed a three-year term.

He succeeds his county man Mattie Kenny, who stepped down in July.

Two members of Donoghue's old Galway backroom team, Noel Larkin and Francis Forde, will join him in the capital, with former Westmeath boss Shane O'Brien also among the selectors.

Cuala man O'Brien has additionally been appointed manager of the county's U20 side for three years.

"We're delighted to announce the appointment of Micheál and his backroom team," Dublin county board chairman Mick Seavers said in a statement.

"Micheál brings a wealth of experience to the role. We wish him and the panel all the very best and look forward to working with Micheál and his team over the coming years." 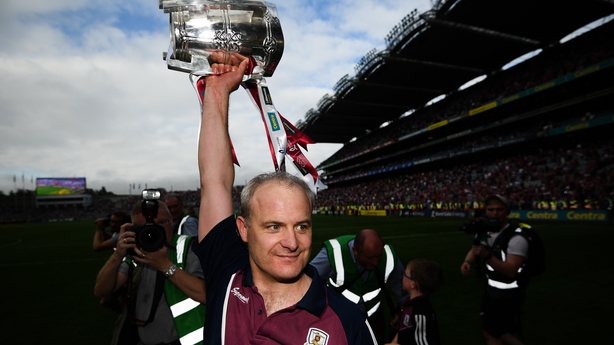 The appointment will be regarded as a significant coup for the Dublin hurlers, Donoghue having built his national reputation during a trophy-laden four year stint with Galway.

Aside from the 2017 All-Ireland victory, Donoghue won successive Leinster titles in '17 and '18, also reaching the All-Ireland final in 2018 and winning an Allianz League title in 2017.

He previously managed his club Clarinbridge to an All-Ireland title in 2011.

Donoghue's predecessor Kenny stepped down as Dublin manager after four seasons in charge, during which the Dubs claimed a couple of landmark wins but failed to progress further than an All-Ireland quarter-final.